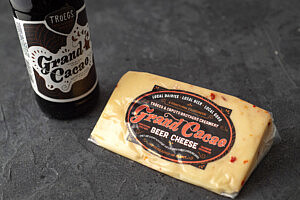 Like the other three cheeses, Grand Cacao Beer Cheese is made with milk from Pennsylvania dairy farms.

“These beer cheeses are literally saving local dairy farms,” says Caputo Brothers President Rynn Caputo. “We pride ourselves not only on making cheese that tastes good, but also does good. And so far, these beer cheeses have helped two Pennsylvania dairies stay in business.”

The result is a sweet and creamy cheese with bright pops of heat and subtle chocolate notes.

“The addition of peperoncini really sets this cheese apart,” says Chris Trogner, founding brother of Tröegs. “I love the blend of sweet and creamy cheese with the subtle chocolate notes and heat of the pepper. And whether it’s for our beers, the Snack Bar at our Hershey brewery, or in collaborations like this, we like to use local ingredients whenever we can. These cheeses deepen our connection to Pennsylvania agriculture in a big way.”

Hershey’s Natural Cocoa was also added, along with freshly ground espresso from Little Amps Coffee Roasters in Harrisburg. Finally, more Mad Elf was added to the mix, then it was rubbed onto the rind of the wheels and left to dry for two days in Caputo’s cheese cave.

The result is a creamy, savory, and sweet cheese with notes of cinnamon, chocolate, coffee, and honey.

“The GIANT Company has a long history of supporting local food businesses and our customers have really loved our ongoing collaboration with Caputo Brothers and Tröegs,” said Brian Lorenz, director of deli and bakery, The GIANT Company. “Customers are not only supporting local companies like Caputo Brothers and Tröegs, but also Pennsylvania dairy farmers too.”

About Caputo Brothers Creamery
Founded in Pennsylvania in 2011 by husband and wife duo David and Rynn Caputo, Caputo Brothers Creamery is focused on revolutionizing the mozzarella industry while providing a sustainable partnership for local dairy farms. Named for their sons, Giovanni and Matteo, the creamery is a true family business. Primarily known throughout the country and chef community for being the exclusive producer of fermented cheese curds that can be stretched into fresh mozzarella, the Caputos have built their reputation of quality cheesemaking by sourcing the highest quality milk possible from local, family-owned dairy farms. To date, Caputo Brothers Creamery has saved two dairy farms with the goal of saving additional farms as they grow. Since 2018, Caputo Brothers Creamery has worked with Giant Food Stores to develop in-store mozzarella and cannoli bars. The creamery currently produces about 200,000 lbs of artisan cheese annually. Additionally, the creamery operates a small restaurant and retail shop and leads culinary tours to Italy. For more information, visit caputobrotherscreamery.com

About Tröegs Independent Brewing
Founded in Pennsylvania in 1996 by brothers John and Chris Trogner, Tröegs Independent Brewing is driven by a sense of adventure and curiosity. From the beginning, the brewery has been built by family, friends and kindred spirits who share a love of great beer. Troegs is widely known for award-winning beers like Perpetual IPA, Troegenator, Nugget Nectar and Mad Elf, as well as the experimental Scratch Series, wood-aged Splinter Series and Hop Cycle seasonals. Tröegs started working in earnest with local ingredients back in 2002 with the debut of holiday favorite Mad Elf. Today, the brewery buys about 25,000 pounds of local honey every year. Tröegs also sources local produce including pumpkins, cherries, peaches, nectarines and strawberries from the fertile Fruit Belt of Pennsylvania. The brewery also uses more than 200,000 pounds of Pennsylvania-grown barley every year.

About The GIANT Company
The GIANT Company believes that no matter where or how, when meals happen, families connect, and when families connect meaningfully, good happens. Guided by its brand platform, For Today’s Table®, the omni-channel retailer proudly serves millions of neighbors across Pennsylvania, Maryland, Virginia and West Virginia. A Great Place to Work™ certified company with more than 35,000 talented team members supporting nearly 190 stores, 132 pharmacies, 107 fuel stations, and over 150 online pickup hubs and grocery delivery service in hundreds of zip codes, The GIANT Company is changing the customer experience and connecting families for a better future. Founded in 1923 in Carlisle, Pa., The GIANT Company family of brands includes GIANT, MARTIN’S, GIANT Heirloom Market, GIANT Direct and MARTIN’S Direct. The GIANT Company is a company of Ahold Delhaize USA. For more information, visit the GIANT or MARTIN’S websites.