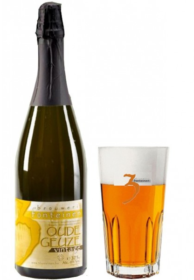 Oude Geuze Vintage 3 Fonteinen is an Authentic Belgian Geuze “Sour Beer”, It is made by blending young (1-year-old) and old (2- to 3-year-old) lambics, which is bottled for a second fermentation, it has an alcohol content of 6%.