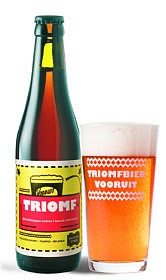 Triomf is a Belgian beer, it has an alcohol content of 6%.

On the occasion of its 100th anniversary, the Kunstencentrum Vooruit of Ghent wished to remind of its brewing activity of the early XXth Century. In this context, the Brewery Dupont was requested to create a beer according to their wishes.
Given the success of this new beer during this event, the brewery started to produce it for all its consumers.
Amber-coloured organic beer, dry and bitter with a smoky (or more specifically peaty) note in taste and flavour. This phenolic characteristic is obtained by using a low percentage of malt specially dried with Scottish peat (whisky malt).