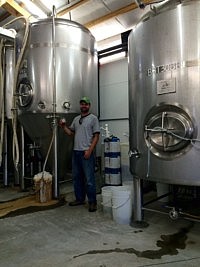 Arch Rock Brewing Company opened its doors on January 25, 2013 after converting co-owners Larry and Marjie Brennan’s cabinet shop into a brewery. Larry and Marjie decided they wanted to start up a brewery in Gold Beach, but quickly realized they would need to hire a professional brewer to make it happen. They started the planning process in early 2012, hired their brewer, James Smith in June and started converting the building from cabinet shop to brewery. James has been a professional brewer since 2004. He moved here from Victor, ID with his wife Kristen. The two of them were both working at Grand Teton Brewing Company, James as a cellar manager and Kristen as a quality control manager. This was a dream opportunity for them to be part of a start-up brewery, a chance for James to make his own beer, and live on the beautiful southern Oregon coast.

We are a production brewery with a 15 barrel brew house and currently have two 30 barrel fermenters and one 30 barrel bright tank. We package in kegs of 1/6, tall 1/4 and 1/2 barrel sizes. We are self-distributing at this time and you can find our beer along the coast in bars and restaurants from Brookings up to Florence, Eugene, Roseburg and the Rogue Valley.

James chose and designed the three beers we currently offer. Gold Beach Lager is a German style lager that is light and crisp, easy drinking and very refreshing. Pistol River Pale, kind of like the old school IPA, it’s extremely hop forward but well balanced and less bitter. State of Jefferson Porter is a robust porter that hints at aromas and flavors of chocolate and mocha; it’s brewed to style and is enjoyable all year round. We are looking to add additional flavors, for now in a “single batch series” way. We will brew a specialty whenever we can afford the tank space to do so. Once it’s gone, it’s gone! Maybe it will be repeated, maybe not, a fun way for James to show his creativity and introduce styles to the coast crowd.

At the brewery you are welcome to stop in and purchase beer to go in a growler, a reusable glass jug. We offer 64oz and 32oz sizes. We also have some merchandise including shirts and glassware. We would be happy to show you around our small operation as long as we aren’t brewing or kegging!

16/04/27 at 9.31am / by Arch Rock / 0 Comment While we are good at making beer, we are still learning about making websites!  Please be patient with us while we work on getting more content on the website. Cheers! Share: ... Read More

16/04/27 at 9.31am / by Arch Rock / 0 Comment While we are good at making beer, we are still learning about making websites!  Please be patient with us while we work on getting more content on the website. Cheers! Share: ... Read More