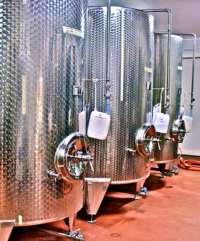 They work in a small brewery honouring the traditional ways of brewing beer: unfiltered, unpasteurized, free of any additives and using only the finest raw materials of the highest quality. Their dedication to uncompromised quality is definitely one of the outstanding characteristics of the brewery.

The beers, with their complex flavour and well-distinguished personalities, are true beers of character, made in Brussels.

The brewery is the initiative of Bernard Leboucq and Yvan De Baets. Leboucq set up the St. Peter’s Brewery in the former lambic brewery Moriau in Sint-Pieters-Leeuw in 2003. He moved on to create Zinnebir, named after the Zinneke Parade. De Baets worked at Brouwerij De Ranke in Dottignies/Dottenijs. The two decided to start a brewery together in 2006. As the building in Sint-Pieters-Leeuw was no longer available, they brewed provisionally at the De Ranke and Proef breweries. Meanwhile the brewers searched for and found a suitable location in Brussels, a former industrial bakery in Molenbeek. A first test batch was brewed in the new premises at the end of 2010. The brewery has a reputation for brewing fine ales and “frustratingly rare blends” that often include lambic from the nearby Cantillon Brewery.

In 2013 they collaborated with Pennsylvania’s Weyerbacher Brewing Company to produce a beer called Manneken-Penn and with Washington, DC’s Bluejacket brewery on a beer called Gray Jacket, in the style of the beer formerly made for miners in the Hainaut region of Belgium.

Heady Amber Ale, generously dry-hopped with German hops. Its nose evokes stone fruits from the South, as well as persimmon. A rather exotic floral side is also present. Its aromas take up the nuances of the nose, adding gourmet notes of biscuity malt. It then develops a beautiful and long bitterness, which harmoniously balances the ... Read More

The Saison van de Bruwer is a spelled, dry-hopped and fermented season with the addition of Brettanomyces. It contains 5.3% alcohol. Her dress is blond, opalescent; its very persistent mousse is creamy and fine. Very aromatic and fruity, its nose is reminiscent of pineapple, quince, apricot and green currants. A “funky” touch typical of Brettanomyces ... Read More

La Jambe-de-Bois is a generously hopped Triple. Heady blonde, she is very balanced and her alcohol power is never aggressive, which makes her dangerously easy to drink. The aromas of fermentation dominate, and are reminiscent of ripe pear and banana. The hops then develop, with floral and spicy notes (white pepper, nutmeg). Its alcohol content ... Read More

Brussels Calling is our anniversary beer. The base is still a 6.5% alcohol blonde, but we change the hops every year. The result is a very balanced “Belgian IPA”. The nose is intense in exotic fruits and floral notes. On the palate, these aromas are prolonged and intensify, structured by an intense but elegant bitterness, ... Read More

Zinnebir is a perfectly balanced Pale Ale, with a golden robe tending slightly towards amber. It develops fruity and hoppy aromas reminiscent of dried apricot and orange marmalade. They are supported by very slightly biscuit malt notes, as well as a nice bitterness. Born in the cellars of a Brussels squat in March 2002, it ... Read More

Zenne Pils is a low fermentation, unfiltered and unpasteurized beer. The traditional method of decoction with which it is brewed gives depth and complexity to its malty character. It is slightly cloudy, finely bitter and pleasantly easy to drink. It is also generously hopped with old varieties of noble German hops. – Permanent beers Share: ... Read More

At the brewery of course! Otherwise, we are present in most drink distributors (those that are improperly called “brewers” ​​;-), in most beershops and in some health food stores. But not in supermarkets: it is a choice on our part. However, it is in cafes in Brussels and elsewhere that you will have the best ... Read More

We make strong beers, but our great specialty are light beers in alcohol, with the typical example of Taras Boulba (4.5%), thirst-quenching beer par excellence. We want to show that you don’t necessarily need alcohol to taste. Light beers also make the pleasure last – and that is what Beer is all about. – History ... Read More

With the construction of our new brewery in Tour & Taxis, we have decided to invest even more in sustainability and ecology: we have thus installed a fleet of photovoltaic panels on our roof, which will produce a large part of our electricity; the energy released during the heating or boiling of the wort during ... Read More

Bitterness is the hallmark of most of our beers: it is their foundation. We’ve been making bitter beers for as long as we exist – and we exist to brew bitter beers! Our approach was very simple: we wanted to brew beers to our liking, which we no longer found on the market. We have ... Read More

Quality and the desire to always do better is an obsession with us. She will never give in to the sirens of profit. It is first of all a quality of taste, with beers of character, without any concession to the commercial side. A quality of raw materials too, which we select with the greatest ... Read More

From the Brasserie de la Senne on 23 June 2016 in Behind the scenes, Events 0 The beginning of summer is when you brew Schieve Tabarnak! Double brew this year: first at the Micro-brewery The Devil’s Hole (Shawinigan, Quebec) with André and Titou, then in Molenbeek. Another few months of patience … Share: Permalink Related ... Read More

From the Brasserie de la Senne on June 16, 2016 in Events 0 Ça y est !! Our last baby, of which we are very proud: the BRUXELLENSIS, refermented in bottles for 4 months with a 100% Brussels Brettanomyces yeast. Ambrée with coppery highlights, very fruity (pineapple and red fruits), supported by aromas hops and ... Read More

From the Brasserie de la Senne June 14, 2016 in Events 0 A bike ride to discover the sources of the Senne: this is what is proposed by Velofabrik for this Sunday, June 19! & gt; & gt; More info: http://us10.campaign-archive2.com/… Share: Permanent link Related Articles BRUXELLENSIS # proud Share: ... Read More

From the Brasserie de la Senne on May 31, 2016 in Cafés 0 Y-t -it still someone & rsquo; one who does not know & laquo; & nbsp; the Nuet & nbsp; & raquo; ?? the name is almost unpronounceable by against the dishes and the beer menu is very tasty and seasoned with a ... Read More

From the Brasserie de la Senne on May 20, 2016 in Events 0 In preparation for the summer season, we present you the ultimate summer beer! Hyper refreshing, brewed with malted wheat and a blend of noble hops and from the New World that give it a marked lemony character … This is SESSION 4, ... Read More