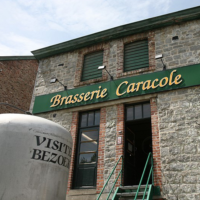 The Brasserie Caracole is a Belgian artisanal brewery based in Falmignoul that is known to warm the water with a wood-fired oven. The bottling and labelling are done manually.

In 1765, a brewery was created in the village of Falmignoul by the Moussoux family. It was then exploited for several generations until 1939, when, during a violent storm, the large chimney broke on the buildings on the street side, completely destroyed. Mr. Lamotte then operated the brewery until 1971, before two Namurois set it off, François Tonglet and Jean-Pierre Debras, who renamed it “Brasserie Caracole”. Proud of the 250-year mark, Jean-Pierre Debras, the brewer today, created the Bonde 1765. The region is also full of many historical anecdotes. A neighboring village, Falmagne was the site of the last battle of the Meuse in 1790, during the Brabant Revolution. The Côte Marie-Thérèse owes its name to Maria Theresa of Austria.