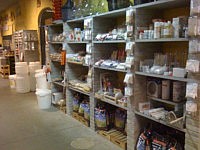 At the end of 1980 café De Hopduvel was founded in Ghent. The name ‘Hopduvel’ (Hop Devil) is a mythological figure from the hopregion around Asse. Due to larger demands for home consumption, drinks center De Hopduvel was opened in 1982.

After a few years located on the Rooigemlaan, the store moved in 1985 to the former steam engine factory ‘Van de Kerckhove’ along the Coupure. The old factorybuilding turned out to be an excellent cool storage space for our beers and wines.

In spite of the expansion drift of the large breweries, and the degradation of different tastes, De Hopduvel has been a combattant to preserve the unique Belgian beer patrimonium. Small breweries are always privileged. As the years went by, more and more young entrepreneurs got to work with making beers, resulting in a lot of new beers.

By the start of the nineties, De Hopduvel launched its house beers. After Stropken and Chateau de Flandre, the remainders Blondine, Brunette, Hoppe Pils, Gentse Tripel and Blondine IPA are strong house brands.

From 2008 onwards De Hopduvel, under guidance of selfmade zytholoog Ignace, started importing foreign craft beers. The offer of Scandinavian, Dutch and American beers is ever growing. A trend that pleased customers and inspired young brewers. The foreign innovations found an their way into Belgium.

For those who want to get their hands dirty, we started as dealer of Brouwland by 2007. Everything to make your own beer or wine is available in the store.

Since the start, the founder Marc has been leading the business for many years with Carine. In 2011 Silke and Tom started working to continue the business and build on three decades of expertise and quality.