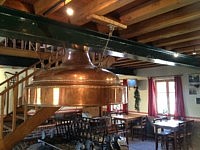 A small family-owned brewery.
All the beers produced in our installations are unfiltered and refermented in bottle on yeast.

The adventure began with the parents, Pierre-Alex and Marie-Noëlle CARLIER – POURTOIS, the first brew took place on March 24, 1988.
The eldest son, Kévin CARLIER, graduated in Biotechnology is now at the head of the Brewery with his wife Bérangère DESCHAMPS and his father-in-law
Claude DESCHAMPS.

The youngest son, Cédric CARLIER, with his wife Stéphanie JUSTE, both graduates of the hotel school, head the Restaurant Le Fourquet, just opposite the Brasserie.

The next generation is assured with the two daughters of Kévin and Bérangère, Manon and Ninon as well as the two sons of Cédric and Stéphanie, Ethan and Mathys.