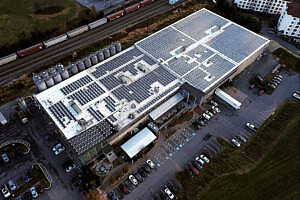 Tröegs partnered with Solar Renewable Energy in Mechanicsburg on the project.Tröegs Independent Brewing recently completed a series of upgrades that will make the Hershey brewery more energy efficient.

A two-day shutdown in late September set the stage for several projects, beginning with a large rooftop solar array. Tröegs partnered with Solar Renewable Energy in Mechanicsburg on the installation of the 643kW system.

As part of the project, Tröegs also added insulation and installed a new white roof membrane to reflect and maximize capture of the sun’s rays. The panels are bifacial, meaning they produce solar power from both sides.

Also, two new HVAC units will sterilize the air that circulates through the brewery. Clean air has never been more critical, and the UV sterilization units will help keep Tröegs customers and co-workers healthy.

“It all adds up,” says founding brother Chris Trogner. “We’re making these incremental changes to decrease our environmental impact and improve the experience people have when they visit Tröegs.”