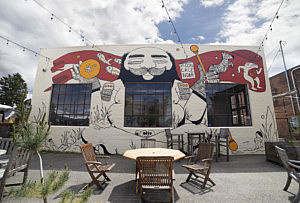 Last month, the Aslan Depot courtyard got a pretty significant makeover. Connor McPherson, just days after returning from Australia, spent a week at the Depot constructing a mural that spans the entire back wall of the Depot. It is impossible not to notice the beautiful mural when walking down State Street these days. We sat down with Connor over a beer to learn more about the man behind the mural.

Andy: How did you get connected to Aslan Brewing?

Connor: I met Jack, Frank, Boe and a bunch of the other guys years ago at a 4th of July party in Bellingham. We were all having a great time. I never lived in Bellingham but just happened to be up here that weekend.

Afterwards, I kept coming back to Bellingham and kept bumping into the future owners. At one point they were like we starting a brewery! I said I bet you are and that sounds great! Didn’t think much of it.

I left on a work trip and when I came back Jack reached out and asked if I wanted to come over and paint a mural. That was the first mural I’ve done, in the back of the brewery by the top offices. I had no idea what I was doing and it was so terrifying. Jack was persistent and kept asking me if wanted to come up, and I was like I don’t know! Jack said just get up here, do it, and we will see what happens.

Since that mural, we’ve had a really rad relationship. I get to grow with the brewery and Jack presents me with some really cool and challenging design opportunities.

Andy: How did you initially get into art?

Connor: When I was a kid I was always drawing. I would just redraw old books like Shel Silverstein’s Where the Sidewalk Ends page for page and Maurice Sendak’s Where the Wild Things Are. I would just draw that page for page as a kid over and over and over again. I fucking loved it. I then got full-blown anime nerd when I was in Jr. High and went really deep down that rabbit hole, for better or for worse.

I played basketball through most of university and was also trying to do art on the side. When I got hurt and kind of had to give up basketball, I went fully into trying to pursue and explore making my art.

I graduated with a degree in art history and I think that’s what blew it wide open for me. Seeing anything and everything that anyone’s ever done. That’s when I was like oh shit this is it! There’s a whole world to look at and take in, but you have to be careful, you can’t just steal or straight up redraw someone’s religious iconography. And yet at the same time, there’s so many little details in all the different styles. Things you can pick up and work with. I love that little bracelet, or I dig the way that person drew the neckline. It all mixes and blends together, it’s inevitable.

Andy: How do you start a new project like a mural?

Connor: It’s always drawing based, somewhere hidden in a sketchbook, a bunch of little ideas getting played out. I try to constantly be drawing in my sketchbook and keeping ideas flowing around. Some of those get turned into bigger things and ideas that I pursue later, but it always starts with little narratives.

The murals are great because it’s a chance to get out of the sketchbook. I haven’t done a whole lot of larger murals like these, so this is still quite a challenge for me, to figure out where I am on the wall and get things to look all even and crispy. It’s a fun game for me.

Andy: You’ve done a lot of Aslan bottle designs, what’s that process been like?

Connor: All of the bottles that I’ve done for the most part have been done abroad. I did the first like ten of them while I was traveling across the Nullarbor, which is a giant two thousand kilometer long desert through the middle of South Australia.

I did all those early beer bottle labels while living in a janky old camper van! I literally had to go on the Australian Craigslist and try to find people that might have scanners that I could use at their houses. I found this woman in Adelaide and paid her ten dollars to go to her house and use her scanner for one scan! There are a bunch of weird stories from that trip. So every time I see those bottles I always laugh, because I think people might imagine someone sitting down going through this romantic artistic process and the whole time I’m feeling like a homeless person, hanging out at free camps, hot as fuck, sweating my face off. The whole thing was a fantastic challenge, but so much fun.