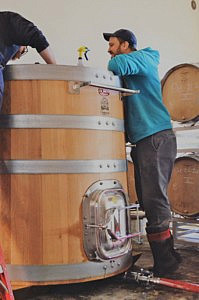 Hi, I’m Scott Martin the Head Brewer at Townsite Brewing Co. One of the reasons I took the job at Townsite was the opportunity to work on new, innovative projects. I had worked at large craft breweries and smaller brewpubs, but this was my first chance to work at a smaller production brewery where I would have the chance to expand my knowledge and try techniques that wouldn’t make sense in any other type of brewery.
What are these crazy projects that I’m speaking of? It all started when I was living in Montreal and emailing with Cédric about making kettle sour beers and what would become the beer L’il Red. 8 months later I joined the team at Townsite eager to try more techniques and production methods. Cédric and I both had wanted to try something called a “Turbid Mash”. It’s a complicated procedure where we mash at different temperatures and move wort back and forth between the mash tun and the kettle. This gives us wort that is rich in large sugars and starches which provides food for the myriad of microorganisms that make these types of beers great. This was the first in the Bois Sauvage Series.
Once we started we had to keep trying and refining our process. Then we wanted to make different types of wild and sour beers and to do so we grew our barrel collection. One problem, we have a limited space to work in. So what’s the next logical step? A foeder.
What’s a foeder? Pronounced (FOOD-er) It’s a large wood vat that we ferment and store beer in. Our new foeder is 15 HL and made of French oak by the barrel maker Garbellotto. They have been making barrels since 1775 in Conegliano, Italy.

So why bother with a wood fermenter? Because… Wood brings something special to beer. Not just because it’s a throwback to the way all beer was made in the past. The way that the beer interacts with the wood and the air create flavors that cannot not be produced in any other way. The first beers brewed will extract flavors from the wood. Then as the foeder ages it will be come a sanctuary for an entire ecosystem of microbes that will make our mixed fermentation beers like the Bois Sauvage, Assemblage #1 and Thaddeus that we have released.

Béa will live amongst the barrels upstairs.

While we love using the barrels, they can be difficult. We are also acquiring them second hand from Coastal Black (The winery on Vancouver Island) and that imparts the flavors from the previous occupants. This will be our chance to start from the beginning. This foeders destiny will start with and hopefully end with Townsite. If maintained properly she could live for a hundred years.

The foeder, whom we named Béatrix after Chloe and Cédric’s first born, arrived at the port of Montreal on July 11th and then on August 14th made its way to Powell River. To start with we wanted to extract some of the oak flavor from her so we filled Béa with perfect storm oatmeal stout and let it sit, soaking up all that vanillin, for a few weeks. We took that out and filled her with Lil’Red, the same beer that began our sour journey here at Townsite.

We have lots of ideas for future brews, using different ingredients and production techniques. We’ll just need to be patient.

Welcome to your new home Béatrix!