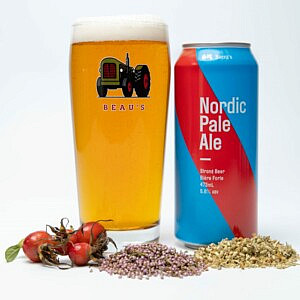 November 7, 2022Ontario-based Beau’s Brewing has a brand-new offering for craft beer drinkers this week, a light lager called Lug Lite. Crisp, satisfying and with a clean taste, the new lager from Beau’s is lighter on calories, but not in character. Lug Lite starts with a smaller bill of the same barley and wheat used in Beau’s flagship Lug Tread Lagered Ale recipe. From there, true lager yeast and an extended aging time transform the results into tasty pure lager cleanness. A 4% ABV boosts drinkability.

Light beer has been a longstanding punchline to a lot of “real beer” jokes, but there is growing data to suggest that more beer drinkers are quietly choosing better-for-you options at the checkout. According to recent sales data from Ontario retailer The Beer Store, light beer is a growth category among premium and craft beers. Miller Lite, Bud Light, Coors Light, and Michelob Ultra are the familiar names in the segment; now Beau’s offers a Canadian craft alternative.

Beau’s co-founder Steve Beauchesne weighs in: “People who drink light beer shouldn’t have to compromise their values, whether it’s supporting local, enjoying real craft beer flavour, or making informed food and drink choices. Beau’s Lug Lite checks all the boxes as a light beer that tastes great, tells you exactly what’s in it, and is brewed in Ontario,” he explains. “It’s light beer you can feel good about drinking.”

Lug Lite is 150 calories per 473 ml can, and it has zero sugar. The all-natural ingredients – water, barley, wheat, hops, and yeast – are printed in black and white right on the can, along with a panel of nutritional facts to support informed consumer decisions.

Lug Lite can be found beginning this week in Ontario at LCBO outlets and select Beer Store locations. It can also be purchased from Beau’s Vankleek Hill Taproom Wednesdays through Sundays, and for consumers seeking the convenience of home beer delivery, Beau’s online store (shop.beaus.ca) ships Ontario-wide.