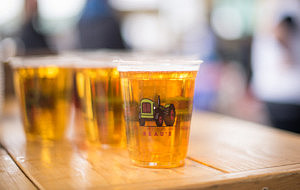 Beau’s Brewing Co. is releasing Paper Chase this week, a certified organic copper coloured ale brewed with locally foraged birch bark and aged on toasted Canadian birchwood. This new beer will be sold this spring in Ontario LCBOs, in addition to being the culminating release tapped at the 300+ restaurants, pubs and retailers in Ontario, Quebec and Manitoba participating in FeBREWary 2019, Beau’s annual mid-winter craft beer celebration.

Beau’s takes Canadian birch and its strong-yet-pliable bark beyond the iconic canoe with the creation of Paper Chase. Just-lit campfires, caramel and tea-like tannins intermingle in this decidedly delicious (and deciduous) 5.6 % ale. It’s part of Beau’s Wild Oats Series of innovative beer recipes that offer bold flavours and new adventures for the craft beer drinker. On the label, two paper airplanes chase each other in a mid-century modern graphic style.

“Working with birch in two ways brings out complexity of aroma and flavour,” explains Beau’s Brewmaster Matthew O’Hara. “The birch bark is hand-harvested and used as an ingredient, and then the beer ages for a time on toasted birchwood.” Paper Chase pours copper with a slight haze and white foam. The aroma consists of caramel, dried fruit and baking spice. The birch asserts itself in the flavour offering firm tannins and impressions of sandalwood. The finish is long, with lingering caramel sweetness. O’Hara suggests pairings with beef bourgignon, medium cheddars, and date squares.

This new release from Beau’s will be widely available this week in Ontario and Québec both on tap and by the bottle at craft-friendly retailers and at LCBO.com. It will also be sold from the Vankleek Hill brewery, and is available for home delivery in the city of Ottawa through social enterprise BYBO.ca.