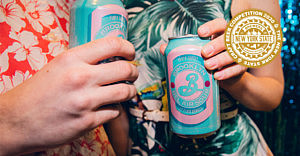 FRI MAY 8Bel Air Sour Brings Home Gold From The NYS Craft Beer CompetitionOur breezy Bel Air Sour blew away the field at this year’s NYS Craft Beer Competition, earning a gold medal in Category 9: Kettle and Simple Sours. We’re exceptionally proud of Brewmaster Garrett Oliver and our brewing team for the accomplishment, and for bringing us Bel Air Sour in cans and bottles for us to stock up on and properly ring in the victory.

You’re invited to the celebration too, of course. Just use our Beer Finder to track it down near you or grab it from a delivery app like Drizly, Minibar, or TapRm.

This was a big year for the NYS Craft Beer Competition, with close to a thousand beers entered from New York’s 467 breweries. Our neighbors in New York City held it down for the hometown with us, including medals for:

Check out the full list of winners here. If you’re in New York State, chances are good you can get some award-winning beer delivered just in time for the weekend.