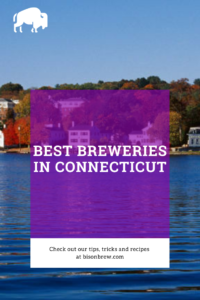 Connecticut often gets overshadowed by the flourishing craft beer scene of New York City. Deep rooted beer culture runs through the state, however, and Connecticut has arguably the most diverse beer range in New England.

Everything from New England IPAs, to sour and wild beer, to expertly crafted lagers can be easily found throughout Connecticut. Forward-thinking brewers are driven by quality, offering up a selection of world-class beer to a loyal beer community. Connecticut breweries continue to push the boundaries, securing themselves as one of the best beer states in the country.

We picked our 10 favorite breweries in Connecticut that represent the state’s impressive brewing diversity. With over 110 breweries in the state, narrowing down our list was a challenge. These are the can’t-miss breweries for any craft beer lover looking to explore the state’s thriving beer scene.

Located on a farm, and driven by the ingredients local to them, Kent Falls make incredible farmhouse ales. Their saisons and sour ales always demonstrate yeast-driven complexity. Don’t sleep on their hazy IPAs either – they’re extremely soft, fully bodied, and packed with flavor.

One of their best beers is Farmers Table, a dry-hopped table beer. Dry, funky, and slightly tart, it’s delicately dry hopped with Cascade. At 3.8% ABV, this beer is incredibly drinkable with a delicious citrus hoppiness.

Cole’s Road BrewingSmall scale, expertly brewed hoppy ales is what Cole’s Road is all about. Using the very best quality hops, including new and experimental varietals, they brew unique and lucious IPAs and pale ales. Fruited sours, lagers, and dessert stouts frequently make their lineup too – all of which are brewed with the same excellence as their hoppy beers.

With such a small production, Cole’s Road sells their beer in crowlers directly from their Berlin brewery. Try Fillmore East, their NEIPA brewed with Galaxy, Amarillo, and Citra hops. It’s drenched in tropical hoppiness with a simple malt bill dialed in for maximum mouthfeel and drinkability.

New England Brewing Co.Since 2003, NEBCo has been brewing innovative beers, amassing a loyal following in the process. Over the years, they’ve made excellent beers across a wide range of styles. Their bread and butter, however, is hoppy beer – especially IPA.

Visit their North Haven brewery to try a selection of delicious cans from some of the country’s most hyped breweries. You might find the likes of Hoof Hearted, Stillwater, and Evil Twin. They also showcase some incredible and small breweries like Abomination Brewing Company and Fat Orange Cat Brew Co.

OEC BrewingBlending traditional brewing methods with innovation, OEC Brewing is one of the country’s most unique breweries. This Oxford brewery ferments their beer in a mix of concrete, stainless steel, and oak. They also use historical equipment and techniques, like aging in clay amphorae and even large granite tanks.

Try out Pétanque, a blend of a foeder-aged witbier and barrel-aged saison. The slight acidity and soft oak character meld beautifully with the dry, rustic finish. This beer’s a must-try but don’t hesitate on any of their wide range of enigmatic wild ales – if you can get your hands on them.

Brewer Phil Markowsi literally wrote the book on farmhouse ales. It’s no surprise that their Worker’s Comp Saison hits all the right saison notes with expert precision. Dry, rustic, and spicy, this saison is easy drinking, but complex and refined.

Fox Farm BreweryFox Farm is one of the best breweries in America right now. Specializing in New England IPA and a range of German-inspired lagers, their beers are endlessly drinkable.

The Cabin, their lightly smoked Helles, is rich and full bodied with a pleasant grassy hoppiness. Subtle smoke delicately provides a comforting and nostalgic flavor.

Fox Farm is a must-visit to experience their exceptional beers directly from their tranquil Salem brewery.

New Park BrewingOffering an exemplary lineup of hazy IPA, New Park Brewing also makes delicious fruited Berliner Weisse. Founded in 2017, they’ve quickly made a name for themselves among craft beer lovers across the country and abroad.

Spectrum is their wheat-heavy Double IPA. It’s massively doused with Australian and American juice-forward hops. Extremely pillowy from the wheat, tropical fruit character drives through the rich 8% ABV body. This excellent ale is one of many in their nearly flawless lineup.

Little House Brewing CompanyLittle House is a must-visit in the town of Chester. They’ve built their small brewery in a historic little house on Main Street. Every inch of space is efficiently used to pump out modern takes on American beer, like Jorts!, their juicy Sabro-hopped pale ale.

They’ve always got a fine balance of rotating beers on tap and to-go in crowlers or growlers. Hang out in their beer garden for an afternoon, and marvel at their quaint and charming little brewery.

Tribus Beer Co.Brewing up a mix of hopped-up IPAs, crisp lagers, and fruited sours, Tribus has fun with their beers. Because of this, they’ve quickly developed a die-hard fan base. They possess the rare talent of staying trendy, but producing only the highest quality beers across their entire range.

Frequently Asked QuestionsWhat is the best beer in Connecticut?As you can tell from our list, there are hundreds of amazing beers in Connecticut.

Right now, Fox Farm Brewing is making beer at another level than its peers. Their IPA, Virid, is probably one of the best NEIPAs out there. Dripping with lychee, passionfruit, and melon, this 7.2% ABV juice-bomb has a pleasant, lingering dry finish.

They didn’t quite make our list but we highly recommend checking them out for their solid lineup of traditional styles.