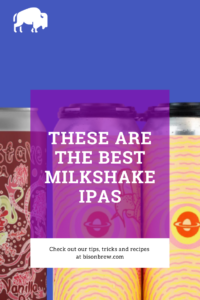 Beer is steeped in tradition and heritage. Style guidelines give brewers a roadmap and direction, but many creative breweries choose to color outside the lines. Modern brewers are more than ever pushing back against traditional beer wisdom, challenging the very core of what beer can be. No better example can be made than the rise of the milkshake IPA.

Lucious, velvety, and juicy, milkshake IPA takes fruit-forward IPA to another level. Starting with the rich body and tropical profile of New England IPA, modern brewers play with lactose and vanilla for added richness. Milkshake IPA is a creamy take on IPA with intense flavors of vanilla and often amplified with massive fruit additions.

The milkshake IPA is a controversial and divisive beer style. But no matter your opinion on this love-hate genre, it’s undeniably innovative. For the lovers, we’ll tell you the best milkshake IPAs available right now. If you’re still undecided, we’ll give you the low-down on the style to let you decide for yourself.

What Is A Milkshake IPA?After the widespread and explosive growth of New England IPA, beer drinkers made clear they were after softer and sweeter flavors. This shift from bitter and aggressive to sweet and tropical had brewers taking American IPA to new and exciting heights.

What is a Milkshake IPA?
Watch this video on YouTubeCatapulting this new direction of IPA to the next level, Tired Hands and Omnipollo teamed up to develop the most decadent IPA they could imagine. Maximizing mouthfeel, sweetness, and fruitiness, these savvy brewer-friends coined the term “milkshake IPA”.

Milkshake IPAs can range anywhere from 5.5% to over 10% ABV. There is no real style guideline and the borders between several styles are certainly blurred. It was conjured as a dream-like beer. Like dreams, the interpretations are limitless.

Hazy, thick, sweet, and exploding with hoppiness, milkshake IPAs are almost impossible to fence in. That said, there are a few aspects that separate the best from the rest.

What Makes A Milkshake IPA Good?The best milkshake IPAs are, first and foremost, packed full of flavor. Hops, fruit, and vanilla are used in excess to push tropical, creamy, and ice cream-like deliciousness out of the glass.

Fruit-forward and citrusy hops are used in massive quantities to provide a hoppy and IPA-like backbone to the beer. Hops like Citra, Galaxy, Mosaic, and Vic Secret help contribute to tropical fruitiness, like they would in a New England IPA (NEIPA). Brewers look to maximize mouthfeel through malt and yeast selection. On top of this, lactose is used for an even creamier texture. Bitterness is almost non-existent but the richness of the lactose should not be so much to make the beer undrinkable and cloying.

A milkshake IPA has a very round, velvety, and creamy body. Large amounts of oats combined with lactose add fullness, sweetness, and richness. Along with specific yeast strains, milkshake IPAs start with an exaggerated base of NEIPA. Milkshake IPAs also have soft carbonation which allows for a thick and silky finish.

To compliment the creamy body and fruity character, vanilla is used to provide a perceived ice cream flavor. This natural flavor combination tricks your brain into believing you’re drinking a milkshake. The experience is fun, nostalgic, and delicious.

To top it off, many milkshake IPAs have fruit and other flavor additions. Anything from strawberry, orange, chocolate, and even marshmallow create unique dessert-like beers.

Creativity is key for delivering a unique and delicious milkshake IPA. With so many flavor combinations, you never know what the next big beer drop will be. A lot of breweries rotate the flavors and fruit additions within their milkshake IPA brand. The goal is to push boundaries, challenge perception, and create exciting new taste experiences.

Pull up to the diner, grab a thick straw, and let’s dive into the best milkshake IPAs available.

Milkshake IPA, Tired Hands / Omnipollosource: Tiredhands.comThe original, and probably the best. A 2015 collaboration between like-minded breweries Tired Hands and Omnipollo led to this new beer style. In what seems like a revolt against convention, the original milkshake IPA was extra hazy, sweet, full-bodied, and creamy. They used a few controversial techniques – like adding apple pectin and flour to the boil – to further accentuate the haziness and creaminess.

Both Tired Hands and Omnipollo release their own versions of their collaborative brew, in various markets. The best iteration is Strawberry Milkshake IPA. Pouring a thick and creamy pink, Strawberry Milkshake IPA is intensely hopped with Mosaic and Citra. It’s fermented with loads of strawberries and vanilla beans making it deliciously smooth.

This collaboration started out as a wild idea among friends. It ended up inspiring countless brewers to throw the rulebook out of the window and have some fun. Rich, yet refreshing, the original milkshake IPA will always be considered the top of its class.

Brewed with vanilla and lactose, this 9% ABV double milkshake IPA gets a rotating treatment of fruit puree with the best fruit yet being pink guava. Pouring a hazy yellow-orange, this version has tons of pure vanilla aroma flying out of the glass. The taste is more vanilla, reserved tropical fruitiness from the guava, and a balanced hoppiness.

Mood Ring, Bearded Iris Brewingsource: beardedirisbrewing.comBearded Iris have never been followers of traditional brewing conventions. Focusing on NEIPA, these Tennessee brewers are known to experiment and take risks. With their exceptional line-up of well established IPAs, they tried their hand at a milkshake IPA. To no one’s surprise, they knocked it out of the park.

Mood Ring is their rotating series of milkshake IPAs with each release testing another flavor combination. If one stands out, it’s the raspberry version. Tart, juicy, and packed with flavor, this beer still has all the hallmarks of a Bearded Iris NEIPA. Intensely fragrant and hoppy but with an additional creamy softness from the lactose and vanilla. At 8.5% ABV, Mood Ring drinks dangerously smooth and will surely enhance your mood.

Milkstave IPA, Tired Hands Brewing Companysource: tiredhands.comAs the inventors of the style, Tired Hands get two spots on this list. They decided to try out a mixed fermentation version, taking the concept of Milkshake IPA to even further postmodern heights.

Milkstave is a rotating series of foeder-aged milkshake IPAs. The best variant (so far) is brewed with pineapple and guava. Starting with a base of their Milkshake IPA, they pitch their house bacteria culture and let it age in French oak foeders for five months. Then they add the fruit, dry hops, and vanilla bean. The result is a complex, sour, funky, yet still creamy interpretation of the style they invented. Delicious, complex, and a little bit more grown-up, Milkstave IPA hits all the right notes.

Milkshark, Bellwoods Brewerysource: bellwoodsbrewery.comBellwoods have garnered international recognition for their impressive and diverse range of beer. Coupled with their iconic graphic design, Bellwoods is one of Canada’s only true “hype” breweries. Luckily for their devoted local clientele, their beer is some of the best in the world.

Milkshark is sweet, hoppy, and packed with aromatic vanilla notes that make this beer super easy drinking for its hefty 7% ABV. Bellwoods has experimented with many fruit additions, but the best uses guava, mango, and passionfruit. Lucious tropical fruits harmoniously blend with the IPA base. Its light but smooth body keeps this beer from being overly rich. Still, the large dose of vanilla screams milkshake.

Vanilla Shake IPA, Westbrook Brewingsource: westbrookbrewing.comWestbrook’s take on this style is as straightforward and classic as a milkshake IPA can come. Taking oldschool IPA hops Cascade and CTZ, and adding heaps of Madagascar vanilla and lactose, this beer is a decadent hoppy dessert. Sometimes simple is best – they really balance the West Coast IPA hop profile with the softness and velvety texture of the milkshake style.

Orange Chantilly, Phase Three Brewingsource: phasethreebrewing.comOne of the most familiar summer flavors, orange creamsicle is a popular theme for milkshake IPAs. One of the first breweries to successfully pull it off was Phase Three. Their Chantilly series highlights various fruits like blueberry, strawberry, and mango. The orange version is nostalgic and absolutely delicious.

Orange Chantilly pours a bright, hazy orange with a nice white head. Vanilla and fresh-pressed orange dominate, but an assertive hoppiness cuts in for a perfect balance. The soft mouthfeel lets this brew glide down the throat; amazingly refreshing on a hot summer’s day. No more running after the ice cream truck, Phase Three has got you covered.

Grovestand, Aslin Beer Companysource: aslinbeer.comAlways at the forefront of craft beer trends, this Virginia brewery has been pushing boundaries since 2015. Specialists of hazy IPA, fruited sours, and pastry stouts, it’s no surprise that Aslin also brews one of the best milkshake IPAs.

Another take on orange ice cream, Grovestand has a cloudy orange-yellow body – just like orange juice. Generously hopped with Citra & Mosaic, the IPA characteristics shine through predominantly. The smooth and rich body prop up the orangey and intense hoppy fruitiness.

Piña Colada Milkshake, WeldWerks Brewing Co.source: weldwerks.comRiffing off one of the world’s best frozen drinks, WeldWerks use toasted coconut and pineapple to create a near-perfect replica of a piña colada. These Colorado IPA wizards amplify the drinkability by large additions of lactose and vanilla.

Pouring a dark yellow-orange, explosive pineapple flavors are paired with NEIPA hops Citra and Mosaic. At 8% ABV, this beer can hit hard despite zero alcoholic bite. The substantial body gives a frothy texture and the light carbonation adds some softness and fizz.

Frequently Asked QuestionsIs there milk in milkshake IPA?Almost all milkshake IPAs contain lactose – a sugar derived from milk. Therefore, milkshake IPA is not vegan, nor is it suitable for people with dairy intolerance.

What’s the difference between a milkshake IPA and a smoothie IPA?Since neither of these styles have rigid guidelines, the differences between them are often blurred.

Generally, milkshake IPAs will have a vanilla component, a milky creaminess, and fruity flavors from hops, fruit, or both.

Smoothie IPA is brewed with large amounts of fruit puree which is usually left unfermented. The fruit adds significant body, sweetness, and flavor. Some breweries warn customers to always keep the beer cold. Unless the beer is pasteurized, the unfermented fruit could start fermenting in the can or bottle. This could cause a pressure build up and an eventual explosion. Smoothie IPA is very sweet and thick, like a breakfast fruit smoothie.