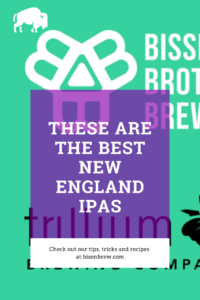 India Pale Ale is all about the hops. Packing as many hops into a beer at every point of the brewing process has always been a hallmark of the style. Pungent, floral, fruity – American IPA is one of the most important beer styles ever brewed. In the past 10 years, however, American IPA as we knew it has turned on its head. We have New England IPA to thank for that.

New England IPA (NEIPA) is a fruity, juicy, hazy, and less bitter subgenre of American IPA. Softer and sweeter, NEIPA is defined by a creamy mouthfeel that props up fruit-forward and pungent hop varieties. Brewers focus on fruity American hops like Citra or Australian hops like Galaxy to produce luxurious, complex, and juicy ales.

Living through an IPA revolution in the craft beer industry is exciting and captivating. This young style is still evolving and refining. In this article, we’ll go through what makes a great NEIPA and list our ten current favorites.

What Is A New England IPA?NEIPA rose to popularity at the beginning of the 2010s. Innovators like The Alchemist, Lawson’s Finest Liquids, and Hill Farmstead started using new hops like Citra, Galaxy, and Mosaic. These breweries wanted to extract the maximum amount of flavor from these beautiful new hops. Slowly, IPA brewers were dropping hops like Cascade and Ahtanum and swapping them with more tropical and fruity varietals.

Defined by low bitterness and soft, silky mouthfeel, NEIPA has an in-your-face hop-drenched character. Inherently hazy in appearance, this IPA subgenre is unique and unmistakable. Usually about 5.5% to 7% ABV, NEIPA is refreshing, highly drinkable, and packed full of flavor.

Intense bitterness and IBUs are no longer the goal for NEIPA focused breweries. Gone are the days of the IBU arms race, battling for who can pack as many hops into the boil kettle. Instead, mouthfeel from the grain and yeast play an integral part to balance out the hop-packed aromas and flavors.

IPA recipes have all but dropped the traditional crystal malt component as well. Lighter in color, NEIPAs don’t have that cloying sweetness from heavy doses of crystal malt, a sweet grain. On top of that, NEIPA brewers have shifted most of the hops to late additions, whirlpool, and dry hopping. Doing this extracts all of the flavor from the hops, without adding much bitterness.

Haze is seen as a byproduct of the combinations of these NEIPA brewing techniques. Combining hop pungency with a silky smooth body causes plenty of hop oils and grain-derived proteins to remain in suspension. The now ubiquitous haze has grown to be a hallmark of the style, with NEIPA often being referred to as Hazy IPA.

New England IPA is now a global style. You no longer have to make the trek to the North East and wait in line for a can of hazy goodness. Still, New England breweries produce some of the top examples.

Here, we highlight 10 of our favorite NEIPAs from New England, the rest of the U.S., and even abroad. Tropical and fruity flavors, soft mouthfeel, and juicy drinkability push these NEIPAs to the top of their class.

Julius, Tree House Brewingsource: TreehouseTree House sits at the top of the NEIPA world. They relentlessly brew outstanding hoppy beers from their state-of-the-art Massachusetts brewery. The king of NEIPA, Tree House is tight-lipped about their recipe and process, but their beers have shaped modern IPA.

Julius is an enigma: mysteriously juicy, yet with a prominent and balanced bitterness. Bubblegum bounces off orange juice and hoppy dankness. A malt backbone strong enough to let all these fresh hop flavors shine but not exactly take centre stage. Vanilla, orange sherbet, and stone fruit notes are there too, likely driven by the yeast.

This beer is one of the most sought-after NEIPAs in the world and represents the pinnacle of modern IPA brewing. There isn’t much more to add that hasn’t already been said about Julius. World class.

Homestyle is brewed with a big portion of oats to provide a smooth and silky body. But, with the ABV kept at 6%, it remains sessionable and refreshing. Mosaic hops provide a complex interplay of berries, citrus, and tropical fruit combined with a subtle floral note. This is one of the most easy-drinking beers on our list – showing the diversity of the NEIPA subgenre.

Their flagship, Hu Jon Hops, blends Australian and American hops for a unique and delicious profile. Pouring a hazy orange with a soft pillowy head, intense tropical aroma explodes out of the can. This olfactory onslaught is due to the use of the highest quality Citra, Mosaic, Galaxy, Summit, and Columbus hops. Refreshing and elegant, the mix of complex flavors is juicy and dank.

Hu Jon Hops is a testament to the commitment of one of Canada’s most talented young breweries. Their driven and perfectionist philosophy is the guiding light in the country’s East Coast beer scene.

Spock It, Monkish Brewing Co.source: Monkish BrewingLos Angeles heavyweights Monkish Brewing have led the surge of NEIPA on the West Coast. Once specializing solely in Belgian styles, their focus pivoted during the rise of hazy, hopped-up IPAs. The lines outside their brewery are a telling sign that this smart, creative, and strategic decision is paying dividends

Spock It is an all Galaxy hopped, soft, and delicious offering. Like pretty much all of Monkish’s IPAs, it’s extra hazy – almost murky – but clean, balanced, and easy to drink. Lucious mouthfeel and light carbonation allow the Galaxy to morph into a tropical smoothie-like flavor.

Susan, Hill Farmstead BreweryHill Farmstead SusanSusan is one of the highest rated IPAs in the world. Unfortunately, it’s not easy to come across. Unless you fill a growler at Hill Farmstead or find it on tap in the North East, you’re not likely going to taste it.

Despite its exclusivity, leaving it off this list would be misguided. It represents a certain local quality inherent to the spirit of NEIPA, brought to us by one of the pioneers of the style. Meant to be consumed fresh, Susan highlights the Riwaka hop – one of Hill Farmstead founder Shaun Hill’s self-proclaimed favorites.

Susan has that soft and beautiful mouthfeel expected of the brewery. It’s combined with the explosive and unique character of the Riwaka hop, making this beer a tremendous NEIPA from America’s best.

Scaled is hopped with American classics El Dorado, Citra, and Columbus. Its wheat-heavy malty backbone is rich, soft, and clean. Pineapple and mango flavors are balanced with a familiar and classic citrus hoppiness.

The oats keep the body nice and fluffy. On top of that, lactose is added to make the base even creamier. Adding a massive double dry hopping of the fruitiest of hop varieties, this beer takes your taste buds to a dream-like state. Oh…so good.

Reciprocal, Bissell Brothers Brewing Companysource: Bissell Brothers ReciprocalBissell Brothers are renowned for their relentless pursuit of perfection. From hoppy beers, to stouts, and recently sour and wild beer, these Mainers produce top rated beer in every style. IPAs were their first passion, and it shows: their releases continue to be excellent.

Reciprocal is a NEIPA hopped with juicy Australian varietals Vic Secret, Ella, and Summer. The beer pours a very hazy orange with a fluffy white head. Squeezing every ounce of flavor from those Aussie hops, comparing this beer to tropical fruit juice doesn’t even do it justice. Reciprocal is 100% IPA – bitter, pungent, and balanced. Juiciness is accentuated with the beautifully soft mouthfeel and goes down smooth, sip after sip.

Juicy Bits, WeldWerks Brewing Co.source: Weldwerks Juicy BitsWeldWerks have been quietly building a reputation as one of best purveyors of lupulin loaded liquid in America. There’s definitely something in the Colorado water – or in the air – that spurs such innovative beers state-wide. WeldWerks’ impressive lineup of beers is led by Juicy Bits, their Citra, Mosaic and El Dorado hopped juice-bomb.

Pouring a beautiful hazy orange, grapefruit, candied orange, and mango-like aromas pop out of the glass. The taste is more of the same juicy goodness all sitting atop a pillowy body.

Soft and juicy, this beer has layers of saturated tropical and grapey hop flavor. Complex and dialed-in, Amazing Haze is an expertly crafted NEIPA that stands shoulder to shoulder with America’s finest.

Frequently Asked QuestionsWhere can I find good NEIPA?Depending on where you live, you might have trouble finding great examples of NEIPA. The style is expensive to brew and requires specific technique and quality ingredients. Many breweries don’t have the resources to brew excellent NEIPA.

Luckily, the style’s secrets to success are starting to become more widely known. Brewers worldwide are sharing techniques and tips on brewing the best NEIPA and it’s starting to show in the quality of beer in general. Check your local breweries and bottle shops and just start tasting. You might come across the next big thing!

If you’re in the U.S., consider a beer subscription service like Tavour or Beer Drop. Both of these regularly feature amazing quality NEIPA .

How long does NEIPA last?NEIPA is a beer style with one of the shortest expiration dates. Because of the enormous amount of hops in every can, these beers start to oxidize and degrade relatively quickly.

Always store your NEIPA cold. Kept in a fridge, most NEIPA will last for at least 1 month. After that, the fresh hop flavors will start to diminish and oxidation could potentially start darkening the color.

Growler fills of NEIPA can start to oxidize within days. Be sure to drink those fresh!