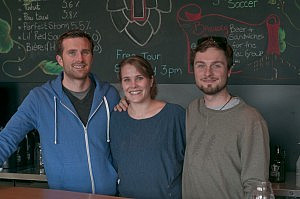 Bikes ‘n’ Beers June 17, 2015 Brett Wildeman recently wound up his Cold Hands Warm Hearts tour at our brewery. Here’s what he has to say about touring on a bike and what craft beer is doing for small town BC:

Like anything
Like anything worth doing
The plot is difficult
The voice is low, you are an idiot
Explored the written word
But now that you’ve seen nakedness
Will you see the good in everyone
– Aidan Knight- You Will See The Good In Everyone
https://aidanknight.bandcamp.com/track/you-will-see-the-good-in-everyone

I have spent countless kilometers exploring the back roads and rural highways of the Pacific North West. Touring by bike has its challenges, as I share my music from town to town, stringing musical notes between these destinations. Some people shake their head in disbelief as they watch me trudging along on my bicycle. A wavering pile of music gear in tow, strapped to a trailer with colourful bungee cords. Cars zip by as my legs slowly churn away. Every hill is difficult, as every kilometer of the road is observed, experienced and digested. Completing music tours by bike may not be easy, but I am always up for the challenge.

Life unfolds at a much slower rate when touring by bicycle. The biggest and most obvious difference is one’s exposure to the elements (rain, sun, sleet, wind & snow) and the speed at which one travels compared to automobiles, the bicycle’s fossil fuel consuming counter parts.
Fueling on a bicycle tour rarely occurs at gas stations (although they do sell a variety of preservative and sugar laden consumable items), but instead small restaurants, cafes and grocery stores that dot rural highways. Like the founding ingredients of beer (barley, hops, yeast, and water), cycle touring consists of a few essential constituents: cycling, sleeping, eating, and exploring.

Craft beer culture has rapidly evolved over the past decade, changing the face of many communities throughout Western Canada. During my travels to towns I have had the opportunity to meet many movers and shakers behind the craft beer movement, including those at Townsite Brewing.

Towns are no longer being recognized purely by historical, cultural, or natural landmarks. In 2015 many towns are being recognized by the malt and hop flavours instilled in their locally crafted beers; flavours which distinguish one community from another.

Craft beer has shown that small town business can flourish and grow beyond their geographic location. Clearly illustrating that thinking outside of the (beer) box can pay off!

About the author:
Brett Wildeman (http://www.brettwildeman.com/) is a guitar strumming, nature loving musician and cyclist who shares his passion for music and the environment through his unique projects and creative initiatives. His recently released an EP titled Peoples, available at: https://mynameisbrettwildeman.bandcamp.com/.