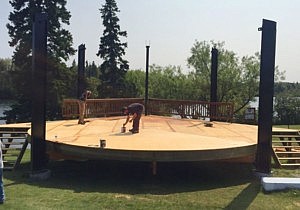 So I just heard about about the BPM (Bike*Paddle*Music) Sunday on September 10th and I gotta say it sounds awesome.

First things first- the Brewer’s Stage at Anicinabe Park is looking like one of the coolest new concert venues in Canada. What’s a better backdrop than the Lake of the Woods? What’s more Kenora? It’s like if Banff built a stage in front of the rockies, or Halifax built an ocean view stage, or Toronto built a stage overlooking soulless condos. The stage just screams Kenora. It is a kick ass venue.

Secondly after reading the schedule I was also reminded of a guy I met in July named Hans.

I was standing in front of Hans in line at a BBQ on the Harbourfront back in July. He looked like a typical Ktown local, but his accent seemed a little too thick, even for Lakeside.

&What brings you to Kenora?”

Hans went on to explain that Harry Macfie was a Swedish writer, who came to Canada in the 1890s to prospect gold on the Lake of the Woods, Falcon Lake, and later in Nome, Alaska. He didn’t strike gold, few did, but when he returned to Sweden he sold Canadian style canoes and wrote books about his adventures in Canada and Alaska. He even named one of his books Farewell Falcon Lake. Now Hans and his son were in Kenora following the path of Harry Macfie through the great Canadian wilderness.

For Hans this trip to Canada was the trip of a lifetime. He and his son travelled thousands of miles across the ocean for a chance to get out on the Lake of the Woods and Falcon Lake. They travelled for a chance to see Macfie’s great Canadian wilderness. Pretty cool, if you ask me.

Back to the BPM- on Sunday September 10th we all get a chance to follow Harry Macfie too. The Lake of the Woods Brewing Company, along with Anicinabe Park, Green Adventures, and the South Whiteshell Trail Association are hosting a full slate of events in the great Canadian wilderness. There are lots of kick ass prizes to win, and best of all it is completely free!

Join in on the adventure in the great Canadian wilderness! For more info check:

See you on September 10th!