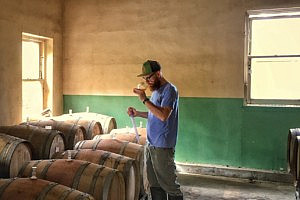 December 21, 2016 Cédric and Scott are proud to announce their first in a series of wild ales.
There are four types of fermentation; lager, ale, spontaneous and mixed. This series focuses on that last type.
Bois Sauvage translates to Wild Wood which is fitting because a) that is one of four Powell River neighbourhoods and b) these beers are not inoculated with known yeast strains but fermented by the wild yeasts that make their home in our barrel room here in Powell River. These are traditional ales made with a turbid mash high in unmalted wheat. During the mash they are taken through a variety of temperature steps to gelatinize and convert the starches into sugars, aged hops are added and the wort is pumped directly into wood barrels. This one made its way to barrels in May of 2015 and was packaged six months ago for conditioning. Normally, when bottle conditioning, sugar and yeast are both added to the bottles in measured quantities which will result in a known level of carbonation, of course with wild ales no yeast is ever added, we are relying completely on our local micro ogranisms for fermentation. Sugar was added to ensure some level of carbonation but it took six months until an appropriate level was detected.

If we had to give this style a name it would be: wild ale.
Organisms at work include: wild Saccharomyces, Lactobacillus and Pediococcus though both are present but in such small quantities as to be unpronounced.
The fermentation of these beers has several components. First wild yeasts put the wort through alcohol and acid producing fermentations. After a month or so the acidic nature of the beer acts as a natural selector of certain yeast strains and only some will survive to continue fermenting, turning most of the sugars into ethanol. Over the next 3 or 4 months Pediococcus, a bacteria not generally welcome in beer, produces lactic acid. Finally Brettanomyces– both bruxellensis and lambicus – go to work creating those horse blanket flavours while transforming any residual sugars into ethanol and acetic acid.
Cédric and Scott are now turning their barrel aging skills to a Solera process, where new batches are inoculated with previous batches. Though this, the first, was not used to inoculate future ales in the series.
To say that these beers are complex is an understatement; books have been written, scientific studies have been undertaken and still they maintain an air of je ne sais quoi. A true bière de terroir, they will take on the natural flavours of each region since they are fermented by the organisms living there. It takes time and commitment, patience and perseverance to coax these beers into existence and they are well worth the wait.

Bois Sauvage- wild ale #1 is available this holiday season at the Townsite Brewery retail store only.