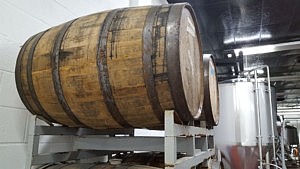 When Keith, Jim and I first started talking about barrel ageing beers I was not sure what direction to take. We are always up to try anything out at 7 Locks, but we also set out to make all of our beers balanced and accessible. Oftentimes a brewery will use their barrel program as an outlet for their brewers to go a little crazy and make more extreme beers. Beers being put into barrels are also generally more robust because they need to stand up to the intense flavors born from wood soaked in whiskey, tequila, rum, or whatever was in the barrel. The result is that oftentimes barrel aged beers are big, chewy, boozy, and frankly hard to drink more than a little of. Some of the most sought after beers in the world are made by breweries producing these beasts, but that’s not what we are about at 7 Locks. We wanted to make sure we captured the complexity of the wood and the spirit, but also wanted to make a very drinkable beer. Tackling the big flavors in spirits barrels the 7 Locks way was going to be a unique challenge.

Before anything else, we had to figure out what types of barrels we could even get. For small breweries like us, the reality of the brewing market becoming more crowded means a tighter squeeze on the cool stuff that everybody wants. Getting your hands on the newest hop varieties, experimental malts, and exotic or rare barrels is tough for us smaller guys as we all clamor for it.

Because bourbon barrels can only be used once in bourbon production, sourcing will always be a bit easier than getting other types of barrels, but I also wanted to try to use some rum barrels if I could. Bourbon must be aged in new, American white oak barrels, so just like brewers, rum distilleries of the Caribbean often look to Kentucky and Tennessee for sourcing barrels since they are in high supply. Since rum distillers don’t have rules regarding how many turns their barrels see, the wood is much older. Older, longer used wood has had more of the tannin and char stripped out, resulting in a more mellow barrel. Perfect for our goals.

We ended up finding barrels from George Dickel of Tennessee, Woodford Reserve from Kentucky and Cruzan from Saint Croix. Part of what I love about barrel ageing anything is the story of the wood itself. Tracking how these barrels ended up in our brewery is fascinating.

All of our barrels, regardless of where they did the majority of their service, started in distilleries in either Tennessee or Kentucky. This means they are all American white oak, probably cut from the Ozarks. After being cut, it all ended up at either at Jack Daniels, George Dickel, or Woodford Reserve. After at least 2 years, the Dickel and Woodford went to a barrel reseller in Denver before coming to us. Next time you’re at the brewery, take a look at our barrels. Some are much lighter in color and just look younger. These are the Dickel and Woodford barrels, which have had only one turn of whiskey in them.

The Jack barrels have a bit more of an interesting story. After being emptied at JD, they survived being scrapped and burned to char their fresh barrels. They then made their way down to Saint Croix to be used at Cruzan. The rum barrels definitely show their age, being darker, the hoops showing corrosion from the salty, humid air, and just being a bit more beat up. Scraping away some of the paint on the heads you can still see the Jack Daniels brand inked on top. We don’t know how long the barrels were down in the Caribbean, but they too went up to the broker in Denver before we bought them up.

I love that these barrels have stamps in their passports, starting in the Ozarks, doing a residency in Tennessee, then going down to the Caribbean before looping up the the Rockies, and now over to us. In a way I don’t see us as the owners of these barrels, rather just the people entrusted to take care of them for the time being, and it is amazing to think of all the craftsmen’s hands who have worked on and with these barrels.

So what’s inside of them? Today I am going to talk mainly about what we will be releasing next Saturday, a big rye beer inspired by the barleywines of the English tradition, but all three beers we have ageing are each very distinct from each other. At some point when we get closer to releasing the other beers, I’ll put up another post about the Farmhouse Strong ale aged in rum and our big plans for our one year anniversary Imperial Stout aged in Woodford Reserve and George Dickel barrels. At this point they need a bit more time before they’re where we want them to be, but they are coming along beautifully.

So what do you have to look forward to on Saturday? Well, we haven’t picked out a name yet, but we designed a the recipe knowing we were going to age it in rum barrels. We wanted something that would complement the caramelly and spicy aroma we were getting out of the barrels, so my mind went to brewing something based off an English barleywine, which often times have complex and intense malty flavors. To add an interesting spicy element to compliment the barrel I wanted to use rye, which adds an almost herbaceous spiciness to beer. At the time I was (and currently still am) obsessed with the crystal malted rye from Simpsons malthouse. It has a very intense flavor so it can easily overpower a beer, but it is seriously delicious. Sometimes I will go into the back of the brewery and scarf down a handful of the stuff. It travels over your tastebuds like a wave, starting sweet and toffee-like, then changing into a dryer toast, and then some slight coffee, chocolate roastiness. I am always looking for an excuse to indulge my love of this malt, so I figured this was a great opportunity to make a beer that could stand up to higher percentages of it.

Since we were going to use a lot of the crystal malted rye, I figured why not make the brew day even more miserable and really load on the rye. For those of you who don’t know what I’m talking about, rye has a very high protein content, much higher than barley. What this means for brewing is that after mashing, the beta-glucans from the protein basically turn the wort into glue. With a much more viscous wort, extracting the liquid from the spent grain during the lauter is much more difficult. Using about 15% rye in a beer recipe is considered a pretty high amount. We used 15% of the delicious crystal malted rye alone. And then we kept the rye coming. Another 10% of the recipe was unmalted, flaked rye. Then we threw in another 30% pale rye malt. So yeah, at 55% rye, plus about another 2% chocolate malt for some nice color and richness and the rest being a premium English Marris Otter barley malt, this beer was anything but easy to produce in the brewhouse. If I recall correctly it took over 14 hours to brew. BUT, it is absolutely delicious, with a complex toffee and toasty maltiness, with underlying notes of vanilla, and a smooth, spicy rum finish.

One thing I was worried about with this recipe was that it would result is a thick, sweet beer, which was exactly what we set out not to do. We made sure to mash it at low temperatures to encourage a dry finish, and switched from our house yeast, a Scottish yeast that generally leaves more body in the beer, to a yeast from an English brewery that is known for fermenting beers down very dry. I think we were successful in creating a beer with a lot of body and malt complexity without it being sweet.

I also think it is the best looking beer we have made to date, with a deep ruby red color and a surprisingly brilliant clarity. Make sure to shine your phone light through it when you get a glass, it really is dazzling.

14 hours on your feet is an easy trade for that.

So what’s next for these barrels? Well I think they’ve got another good turn on them before the spirit flavor is neutralized, so we’re in the planning stages for what type of beer we want to put into them next. From the onset we wanted some pushback from the local community to impact the beers we make, so send us an email or give us a hollar at the tap room with your suggestions for what type of beer we should put in them. Who knows, maybe we’ll even work with you on developing an idea if we like what you’re thinking!

And after that? We haven’t made our minds up yet, but we are all leaning pretty heavily towards starting a sour program. But let’s save that for another post.

So the first 7 Locks barrel aged beer is released this Saturday, a strong and beautifully red rye beer aged in rum barrels. Come give it a taste and let us know what you think.