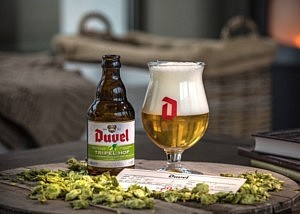 Every year there is considerable excitement around the arrival of the new Duvel Tripel Hop. For 6 years now Duvel’s master brewers have been doing their best to surprise beer lovers with a new and surprising type of hop for this unique specialty beer. This year they chose HBC 291, a hop type that is so new in fact that it hasn’t even been given an official name. This new type of hop brings to the glass flavors such as black pepper, rose and lavender. This selected hop is part of an innovative cultivation scheme and Duvel’s brewers are among the first to use this HBC 291 hop on a larger scale.

Year after year the brewers go hunting for a new type of hop to give their beer a unique flavor and each time they succeed in using a hop that is barely known at the time. This year they chose an experimental hop that is so new that the type of hop is still to be named. Hop type HBC291 is a type of hop coming straight from the trial fields, and lending the flavors of black pepper, rose and lavender.

Just as the choice of grape determines the character of a wine, hops are all-important in the character of beer. Over the past years Duvel’s brewers have developed an excellent partnership with a hop grower in the Yakima Valley, a sunny valley in Washington State. This is where the best hops in the entire United States are grown, thanks to the microclimate to the east of the Cascade Mountains.

The HBC 291 hop is a brand new type of hop, which is part of an innovative cultivation scheme. In taking part in this scheme Duvel’s brewers have the opportunity to test out the very latest developments.

Three high-quality hop types are selected for Duvel Tripel Hop, including of course the Saaz-Saaz and Styrian Golding, used in the classic Duvel recipe, and complemented by HBC 291 in the case of Duvel Tripel Hop 2016. HBC 291 lends a particularly mild flavor: a balanced mix including notes of pepper, floral and fruity nuances.

“It is always amazing how you can give such a wide and varied complexity to specialty beers just with the basic ingredients alone”, declares Duvel’s master brewer Hedwig Neven.