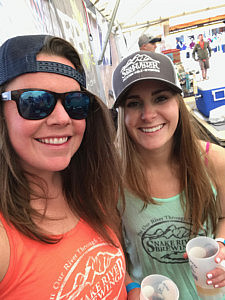 &nbsp Brewfest Season 2017 I was hired on as Sales and Marketing Assistant right at the end of summer last year. While working on events, parties at the pub, beer dinners and sales during the fall, winter and spring all I kept hearing about was how insane the summer is for the brewery. Everyone kept telling me “brace yourself, Tess” or “summer is coming” in the same ominous voice that die hard Game of Thrones fans use.   They were referring to the brewfest circuit that takes place through (mostly) the months of June, July and August. Now that this portion of my year is over I am able to take a second and totally appreciate what everyone has told me in the past– summertime in the beer industry is exhausting. I mean that in the best way possible, though. I have had so much fun getting to travel every weekend, meet new people, try interesting beers and learn more about the beer industry! Old West Brewfest – Jackson Hole, WY   We started things off with a bang at our hometown Old West Brewfest in downtown Jackson, Wyoming. Our festival is over Memorial Day weekend so it is a great way to kick off the summer season! ​The Golden Boot (aka people’s choice beer) went to our friends over at Grand Teton Brewing Co. for their Grapefruit Gose. A very well deserved award for a delicious beer! ​ Lookin’ good, Nick!​

This one was especially fun because my Dad ​(who is mostly a domestic beer drinker) was in town and we convinced him to try some sour beers. This was his reaction…   Guess they aren’t for everyone, eh?  North American Beer Awards – Idaho Falls, ID  The next festival on the calendar was North American Beer Awards (NABA) in Idaho Falls. This event is pretty cool in that it is the second biggest judged beer competition in the country. Only second to Great American Beer Festival in October. I was pumped because we had a big crew of brewers drive up from Jackson to party in Idaho Falls for the weekend. We took home a bronze medal for our Le Serpent Framboise and gold medal for our Hoback Hefeweisen! Holla!   How could you not have fun with this crew? After the awards ceremony on Friday we were able to celebrate our wins with all the other reps from different breweries. One of the best parts of my job is seeing the same hooligans at different brewfests throughout the summer. It is like some crazy rowdy beer traveling circus.   ​Clearly 100% sober…​ Lander Brewfest – Lander, WY ​Another highlight of the summer was the weekend in Lander, WY for the Lander Brewfest. One of the most fun things about that weekend was that I went with my good friend and SRB front of house manager, Faraday! We also ended up spending the majority of our time with the Melvin and Roadhouse brew crews while down in Lander. There is a really fun competition/camaraderie between the Jackson breweries! Jackson Hole represent! Saturday morning they even had complimentary golf for all the brewery reps… and since Faraday and I are AVID golfers we signed up! Just kidding, we just like to drive around in golf carts and drink beer. I think Faraday, Neil and I may have been delirious from the after party on Friday night but I can’t remember the last time I laughed that much in one day. Good times. Laramie Brewfest – Laramie, WY​ Next stop on the tour was the Laramie Brewfest which also coincides with their annual Jubilee Days celebration. This weekend was super fun because there was a fair, roller coasters and live music on the main streets downtown! I also just love Laramie (mostly because I love the crew at Altitude Chophouse and Brewery) so this fest was for sure one of my favorites of the summer! Altitude head brewer, Pat and old head brewer Jesse! Our Saratoga buddies Scott and Michelle even came down to hang with the SRB team that weekend. We also had some awesome volunteers that relieved us of our duties so we could walk around and enjoy the festival. Suds n’ Spurs Brewfest – Sheridan, WY The next festival I teamed up with my girl Faraday again for the Suds n’ Spurs Brewfest in Sheridan, WY. This was a special treat for me because I have never seen that part of the state of Wyoming–the drive was so beautiful it was hard to complain that it was 8 hours long. We were shown such great hospitality from our friends over at Blacktooth Brewing– big shout out to Mr. Tim Barnes for showing us the best time! I already told the rest of the SRB sales team that I call dibs on this festival next summer!   We (of course) got King Ropes hats because when in Sheridan thats what you do! Great American Beer Festival – Denver, CO The end of the season culminates with the biggest beer festival of the year, Great American Beer Festival. It is the Superbowl of beer festivals. 2017 was also the biggest year ever, with over 8,000 beers judged by a panel of experts from all over the world. It also just happens to be a really fun party weekend in Denver with fun beer events all over the city. I was lucky enough to go to this festival last year so I was PUMPED to get back down to Denver and represent SRB!   We clearly had no fun…

We were so proud that our Speargun Coffee Milk Stout won the Gold Medal in the “Coffee Stout or Porter” category– a category that had over 100 entries! We celebrated the win with a fancy dinner downtown and a couple rounds of tequila shots because you can’t always drink beer…   Feels good to be a winner! Looking back on the past few months it has been a bit of a blur but meeting all kinds of beer nerds and exploring the state of Wyoming has been incredible. My memories from this summer (while they may be a bit hazy at times) will always make me look back and smile. Big thanks to all my coworkers, the other breweries who showed us their hospitality, and all the beer reps for all the good times! See you guys in 2018!