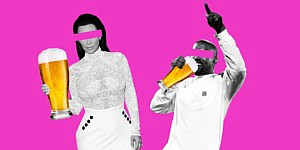 Francis Ford Coppola, Bob Dylan, John Legend, Kyle MacLachlan, and George Clooney are among the many celebrities who have gotten into the wine and spirits game.

And yet there are almost no celebrities-slash-brewers. Beer endorsements are ubiquitous, from Frank Sinatra hawking Budweiser in 1965, to Stella Artois’ Super Bowl 2019 advertisement with Sarah Jessica Parker and Jeff Bridges. Societal perceptions of beer, however, and the intricacies of celebrity culture, keep boldface names from monitoring the mash.

In simplest terms, wine has ancient, Old World gravitas. Spirits are collectible and infinitely sellable. Beer, on the other hand, is the people’s drink.

“Beer tends to be about authenticity and ingredients. Having it be endorsed by Kanye or Kim Kardashian wouldn’t really help your case, it would probably hurt you,” Steven Grasse, who owns Tamworth Distilling in New Hampshire, and who has created or revived such blockbuster brands as Hendrick’s Gin, Sailor Jerry rum and Narragansett beer, says.

For many Americans, beer is linked to craftsmanship and workers putting in long days at steel mills. Craft beer fans wait in lines on sidewalks for can releases to demonstrate their devotion, whereas wine and spirits collectors have Sotheby’s associates and whiskey insurers.

Celebrities aren’t brewing beer because it doesn’t have the cash or cachet of wine and spirits. The thing is, consumers aren’t particularly thirsty for celebrity-brewed beer, either. We, the drinking public, want to believe beer belongs to us.

In 2007, rap mogul Sean “Diddy” Combs became the first star to sign an agreement that put him in charge of all brand management decisions for a spirit. As director of brand management for Ciroc vodka, Combs’ compensation came in the form of 50 percent of future profits from growth. Analysts estimated he could make up to $100 million from the deal.

One hundred million dollars isn’t a number most craft brewers will see in a lifetime.

Just ask Stone Brewing founder Greg Koch. He has released collaboration beers with “Star Trek” actor Wil Wheaton and Metallica, and is currently traveling the world to co-host events with the band during its world tour. As someone whose business has gone through several major expansions and contractions over the past few years, Koch acutely understands brewing’s financial pinch.

“George Clooney with his tequila made the kind of money that is not available in the brewing world. I don’t think a celebrity would be able to swoop in and make bank,” Koch says

Grasse agrees. When VinePair asked him to speculate why fewer celebrities are brewers, he immediately responds, “Maybe it’s because the beer business kinda sucks.”

“The brewery business requires a lot more attention and babysitting than the spirits business because when I make a whiskey I have huge margins on it and I have forever to sell it because it doesn’t ever go bad,” he says.

Stone Brewing and Metallica recently launched a collaboration beer, Enter Night Pilsner. Credit: Facebook.com/ArrogantConsortiaImage also plays a part. While beer has moved out of dive bars and into Michelin-starred restaurants over the previous 20 years, in some circles it does not have the same heritage or prestige as premium wine and spirits.

“Beer was built on the back of a bro culture with mud wrestling women and lizards and ‘Whazzup!,’” Joe Heron writes in an email. Heron developed and sold Nutrisoda to Pepsi, and Crispin Cider to MillerCoors, before starting Copper & Kings American Brandy in Louisville, Ky. “That image has been hard to shed (and they are trying), but wine is perhaps perceived as more elegant and reflective of good taste.”

Nile Zacherle, a Napa winemaker who co-owns Mad Fritz Brewing with his wife, believes that the notion of terroir gives wine a limited-engagement quality that might appeal to celebrities as well.

“The romance of wine perhaps offers a more seductive allure to celebs that aspire to have their name associated with a product (wine) that is limited by its resources, perhaps not dissimilar to their abilities to do what they do,” Zacherle writes in an email. “There is only so much of a person to go around so they are as limited, rare, and exclusive as the place they grow their grapes.”

“In that world celebrity endorsements work because if there’s nothing I can say about the ingredients I can just put b.s. on and it’ll sell,” he says.

There are a few beer-loving celebrities bucking the trend. Wil Wheaton, Metallica, and Megadeth frontman Dave Mustaine have collaborated with craft breweries to create special beers for their fans. They seem to sell well, generate buzz, and help cross-promote the brewery and the band to each other’s respective followers. Everyone wins.

“I find it attractive to work with a fellow enthusiast, a fellow geek. Somebody who likes to enjoy life from a deeper perspective,” Koch says of his collaboration with Wheaton, an avid homebrewer who visited Stone for years before collaborating with the craft brewery.

Of course, for every Dave Mustaine there’s at least one Jimmy Buffett. Landshark Lager, Buffett’s self-branded beer sponsor, launched more than a decade ago, but Buffet himself isn’t brewing the beer. Anheuser-Busch InBev makes it under a licensing agreement with the crooner’s company, Margaritaville.

Of the very few celebrity-owned breweries that do exist, one might argue they lack the star power of, say, George Clooney. Rocker Logan Plant, son of Robert Plant, owns London’s Beavertown Brewery. Boy band Hanson privately owns Hanson Brothers Beer Co. in Oklahoma; while its public relations agency says the brewery remains in production, there have been no public sales or social media activity since May 2018.

Similarly, actor Adrian Grenier “temporarily” ceased operation of his Churchkey Can Co. six months after opening in 2015. Barrels & Sons, a Napa County brewery launched by folks with the last names Mondavi and Busch, isn’t conducting any public activity these days. Not even Napa Valley tourism officials have updates.

When it comes to marketing a consumer product, public perception and industry practices often evolve in tandem. Corporatization has already changed the way beer is brewed, bought, and sold in the U.S., not to mention emerging craft markets like China.

As deep-pocketed investment firms and overseas conglomerates continue to commodify creative fields, there very well might come a day when Big Beer merges with entertainment.

In other words, Landshark Lager could be the first of many. Buzzwords like “co-branding” and “synergy” might overtake “authenticity” and “craftsmanship” in beer marketing. And the slickest celebrity you can think of might be declaring their love of cleaning tanks or curating draft lines by 2024. Emma Stone Saison has a nice ring to it, doesn’t it?