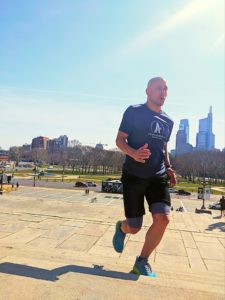 On the cans, you will meet 10 industry professionals who are ready to tell their remarkable stories of how they got their start and paved their own path in craft, rules be damned. Without further ado…

How did you discover the world of craft beer, or what inspired you to join?I’m 55, Italian, born and raised in Philly, and I never thought I would leave. My background is in radio, TV & film, but that’s not what led me to moving all the way to Connecticut to become the packaging operator at Athletic Brewing Co.

My journey to eventually working with Athletic Brewing Co. started in 2003 when my life changed forever. I was sitting at a red light when I was struck by a drunk driver flying at 70 mph. In a surreal experience, I went from sitting in my car on an ordinary day to waking up in a hospital bed and the doctor saying,”You’re never going to walk again,” with no recollection of the events in between.

They were so sure, they handed me a wheelchair magazine and told me to pick one out. And I was like, “Are you kidding me? I’m going to walk out of here.” To which they commended my positive attitude, but pushed to remind me to have realistic goals at the same time. They didn’t understand how much I believed in what I said.

I’m from Philly, I’m Italian, I’m the real life Rocky Balboa and I was going to walk out of that hospital. While at the hospital, I did start in a wheelchair, but by my release on the 11th day, I walked out.

The doctors were shocked. But I was still branded as permanently disabled, immediately put on disability, and put on so many pain medications. I gained a lot of weight because I was inactive, slept a lot, and was depressed. Something had to change, or I was going to die.

The next 18 years would be a long recovery where I started with using a walker to only using a cane, to only having a limp, to walking normally, to coming off of the extreme pain medication prescriptions. At every stage, the doctors never thought I could do more, but I did.

In celebration, I made a New Year’s Eve resolution on January 1st, 2013 to continue to push myself to be healthier and I signed up for a YMCA 5K race. I trained by walking around my neighborhood, slowly adding in more miles. The day of the race, I ended up running the whole race instead of walking and I felt so alive. It had been so long since I felt alive like that.

My 5ks turned into 10ks, and then half marathons, and then two marathons in 2016. One was a lottery entry into NYC which I never thought I’d win, but did (it’s an 8% chance) and one I paid for in Philly. The races were two weeks apart and I completed both. People thought I was crazy.

So what led you to Athletic Brewing Co.?In 2018, I looked for more ways to improve my health. I was exercising, eating healthy, and decided to trade my beer for a non-alcoholic option. That’s when I found Athletic Brewing Co. They had some of the best N/A options, my favorite at the time being “Run Wild” IPA. Two months after being a customer, I applied to be an ambassador. It perfectly aligned with my talent in PR with my love of healthy options.

Taking a look at my life and with the encouragement of those around me, I saw how much I had overcome since the accident. So I took the last step to put my accident behind me. I came off of disability and started looking for jobs. I was nervous. ‘Who’s gonna hire me with an eighteen year gap in my resume during the height of a pandemic?!” or “Would anyone risk taking me on with my history of disability?”

The person I was seeing at the time suggested I look to see if Athletic Brewing Co. was hiring since I loved their company so much. My head was filled with questions. “What am I going to do, move to Connecticut where I don’t know anyone?” I was proud to be from Philly and I had never been anywhere else. With the help of the ambassador coordinator, Mason Gravely, I moved to Connecticut and got in the door on the packaging team. I now have an apartment, a car, and I am employed.

Opportunity is out there. You have to be open to it and there will always be people who push you forward.

What do you love about the craft beer community? Where would you love to see it grow or improve?I think the thing I love the most about the brewing industry is the laid back, relaxed, welcoming nature that seems to be commonplace across the board. When I was looking to re-enter the workforce, it was the craft beer industry that took a chance on me. When Athletic Brewing Co. hired me as a packaging operator, I was experiencing homelessness and couch surfing. They took a chance on me even though my resume had an 18 year gap from recovering from disability. I couldn’t see the same thing happening in other industries. There’s a sense that we’re all in this together. That said, I’d like to see the industry become much more diverse & actively seek to make it a reality.

What types of skills have helped you personally succeed in this industry?I think the skills that have helped me succeed in the industry are my work ethic, my enthusiasm for the product & my attention to detail.

Who in the craft beer industry do you admire?The people I admire most in the industry are Bill Shufelt & John Walker, who led the recent reinvigoration of the non-alcoholic sector at a time when the category was stale & mostly dormant.

What does it mean to you to work at a brewery that promotes Non-Alcoholic Drinks?I like the option they provide for people. I’m not anti-alcohol. There’s a place for everything, but the industry as a whole has this misplaced perception on people who say they drink N/A beers. I’m proud to be a part of a company that is changing that mindset.

What do you like about the role of packaging operator vs the other various jobs in the industry?Packaging operator at Athletic Brewing is not what I had initially applied for, but it ended up being the perfect entry to learn the most. I wouldn’t have gotten that in other roles. My background was in marketing so I didn’t have any formal beer or brewing science knowledge. I like being on the ground, on the inside, and side by side with the brewers.