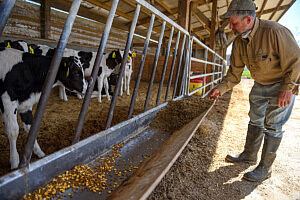 With the rise of small-batch malting in Pennsylvania, we’ve been lucky to establish relationships with a variety of local farms and maltsters to deepen our roots in our home state of Pennsylvania. Two local PA-based maltsters in particular – Deer Creek Malthouse in Glen Mills and Double Eagle Malt outside Philadelphia – produce malted barley used in some of our most popular beers.

“Our priority is buying the best ingredients in the world,” says John Trogner, our co-founding brother and brewmaster. “A lot of times that means we’re pointed toward Germany for grain or the Pacific Northwest for hops. But sometimes we find what we’re looking for right in our backyard.”

That’s why we’ve committed to purchasing as much as 250,000 pounds of locally-grown barley annually to use in beers such as Field Study IPA, LolliHop Double IPA, and Troegenator Double Bock.

“We like to use local ingredients because we can easily get out and try them,” says Trogner. “We really do dig getting in the fields and tasting the ingredients and using them in beer.”

You may know that we recently began incorporating Pennsylvania-grown and malted two-row barley into the malt bill of our iconic, award-winning Troegenator Double Bock, a beer that has been a mainstay at Tröegs for two decades.

“When people think of local ingredients, they often think of hops,” says Trogner. “But the quality and quantity of the grain in Pennsylvania lends itself to brewing. On top of that, we’re reinvesting in our community. Sending a check to a local grower feels good.”

And all that spent grain goes right back to where it originated. Last year, we utilized over 8.5 million pounds of grain, and every ounce of it went back to several local farms to be used as cattle feed.

One of the farms, Summit Level Dairy in Elverson, PA, uses a portion of our spent grain to feed its dairy Holsteins. This crucial – and sustainable – step in the journey of brewers’ grain brings the entire process full circle.

“The hard work of our local farmers shows in the taste of these grains,” says Trogner. “I really can’t say enough about how much I love living in Pennsylvania. There’s so much to work with here. And Chris [Trogner, co-founding brother] and I try to support our community in any way we can.”