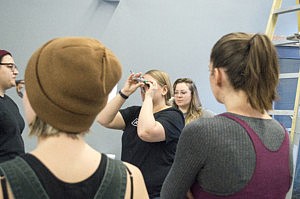 Our First Community Tap This Sunday we are launching our first Community Tap beer at PEG Beer Co. I am beyond proud that this beer was brewed in conjunction with International Women’s Collaboration Brew Day (IWCBD).

This was my third year brewing with other Winnipeg brewsters but the first time brewing a batch commercially. Thank you to Nicole Barry for trusting us in your brewhouse!

The past two years on International Women’s Day my good friend Sara Drysdale and I have been cobbling together our home-brew equipment and hosting a brew day on my back deck, inviting other local women to join us.

Every year there is a theme for IWCBD and it’s always interesting to see what everyone else brews. Our first year, in 2015, the theme was Unite Red Ale. We decided to make our recipe very red and called it “Shark Week.” In 2016 the theme was to brew something we’ve never brewed before. It just so happened that Manitoba was also celebrating the 100th anniversary of women’s right to vote in Manitoba, so we brewed a saison we called it “Suffragette Saison.”

On March 8th 2017 the brew moved from my back deck to PEG Beer Co. This years team was comprised of professional and amateur brewsters. It was definitely more nerve wracking but also an exhilarating challenge. This year the theme was using local ingredients, which was a bit of a challenge considering most options were still frozen. We found inspiration using local honey from BeeMaid and locally grown Willamette hops from Sandra Gowan at Prairie GEM Hops. The result is “Don’t Call Me Honey” Brown Ale.

This beer is PEG Beer Co.’s first Community Tap beer and a portion of the proceeds will be going to Women’s Health Clinic.

I am looking forward to IWCBD 2017 and meeting more beer loving women. There is still lots of work to raise the profile of women in our industry but the road is currently being paved by a small group of women locally in the industry. Hope you join us at PEG Beer Co. Sunday April 2nd for the launch of “Don’t Call Me Honey!”