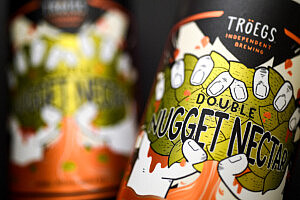 It’s time to double down and really squeeze those hops for all they’re worth, because Double Nugget Nectar returns on January 23. And good news to our fans outside Central PA… it’s coming to your neck of the woods, too!

Back in late 2020, the idea for this beer was hatched by our Scratch Beer creative team when someone said, “Let’s take Nugget… and double it!” While it wasn’t quite that easy to execute, our brewers took to the challenge.

“My favorite meeting is with our Scratch Beer creative team,” says our brewmaster and co-founding brother John Trogner. “That’s where we came up with the concept of Double Nugget. Bringing this beer to life proved to be a fun balancing act.”

To balance the assertive hop bill, the beer’s recipe calls for Munich, Pilsner and Vienna malts as well as flaked oats to lend a bready sweetness while contributing a deep amber-orange color. Weighing in at 9.5% ABV, it’ll keep you warm and cozy while we’re stuck in the depths of winter.

Looking for a taste of Double Nugget Nectar? Try it on draft at one of our many First Squeeze events happening right now at a bar or restaurant near you. While you’re there, you can also pick up free exclusive glassware and limited-edition art prints designed by some of our favorite artists.

Rather get Double Nugget at the source? Join us for the inaugural First Squeeze Weekend at our brewery in Hershey, PA, from Thursday 1/26 through Sunday 1/29. We’ll have tons of specials throughout the entire weekend devoted to our iconic Imperial Amber Ale, including special Nugget pours with take-home glassware, Double Nugget Nectar and Nitro Nugget on tap, exclusive firkin tappings, and much more.

But don’t procrastinate! Grab Double Nugget Nectar when you see it, because this uber-limited beer will vanish in a flash. Look for 16-oz. cans at your favorite store that carries Tröegs, or use our Brew Finder to score some near you.