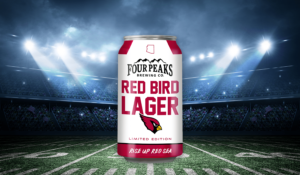 This will be the second year we’ve released Red Bird Lager, but the first that the beer will be sold in 12-ounce cans. It’ll be available in 15-packs in grocery and convenience stores throughout Arizona beginning Tuesday, September 8—just in time for the Cards’ first game on September 13.

“Even if fans aren’t able to watch the Cardinals play in person at all this year, they’ll still be able to drink like they’re at an NFL game,” says Four Peaks co-founder and head brewer Andy Ingram. “With Red Bird Lager, Cards fans can be red, see red, and drink red.”

The 2019 edition of Red Bird Lager sold out quickly in Arizona due to Cardinals fans’ excitement over the collaboration and enjoyment of the beer’s smooth, toasty flavor. We didn’t make any changes to the recipe for 2020, but we did update the beer with new packaging that celebrates “15 Years of Protecting the Nest” (also known as State Farm Stadium, the Cardinals’ home in Glendale, Arizona) and mimics the Cardinals’ white and red “away game” jersey.

“Every game will sort of be an ‘away game’ this year, so we thought it was fitting,” Ingram says.