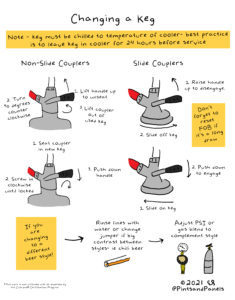 Meet Em Sauter, a cartoonist and founder of Pints and Panels, craft beer education with a whimsical twist.

I had a Sam Adams White ale in 2007 and it changed my life. My first book is dedicated to that beer, and they don’t even make it anymore. I lived in Boston at the time, large regional players, not a lot of small regional breweries. Beer has changed, and not in a bad way.

I moved to Vermont in 2009, where I got my graduate degree in Cartooning from the Center for Cartooning Studies. 2010 is when craft beer really took off, that’s when I started Pints and Panels, and we’re celebrating its 11th anniversary this year.

After graduating, I moved to Oregon and worked at a beer store, which is a great way to get your foot in the door, as you get to meet different sales reps.

It was a small shop, and I mostly served cigarettes and thirty racks of Natty Light to Dartmouth students, and singles to the construction workers at a cement factory next door.

When I started Pints & Panels, I was driving in my car running errands, and realized I wanted to review beer in cartoon form. I went to my boyfriends at the time and he gave me the name idea.

I kept drawing, moved back to Connecticut, worked for a larger brewery, doing PR and communications, for five and half years. I wanted to take the master Cicerone exam. I started studying, using my comics as visual beer education, which really helped me as a visual learner.

Right now, I’m my own boss, and it’s great. I draw all day, and I’m working on my next book, Hooray for Craft Beer.

A lot of people read my social media accounts, and that’s helped people see their pathway into the craft beer scene, because there’s really so much you can do.

We’re mostly all nice, and people want to help other people. As I’m writing my second book, I’ve interviewed a few other beer writers, and they’ve been great.

Everyone is so nice, 99% asshole free. For example, I’m going to Portland, Maine for a beer trip, and so many breweries have reached out in advance with recommendations.

There’s a good article in Beer Hunting by Lily Waite titled, “The Call is Inside the House,” where she went through all things are wrong with craft brewing, low wages, diversity, lack of unionization, exploding cans (unfermented beer), those are things that we could improve on, and we’re getting there.

Two things. One, it’s knowledge, as there’s a lot of misinformation in the industry.

Second, is friendliness, which I incorporate into Pints & Panels.

A brewery that is successful is one who treats their employees well.

Dr. Jackson, she’s my hero. I’m in her book group, and I love her! What she does is so awesome. Every time I have a question about something in the beer world, she’s someone I truly look up to in the industry.

Sam Adams White Ale. In 2019, I took some really great beer trips. I judged the Australian international beer awards. Being in a completely different scene was awesome, and we went to Belgium, and Orvale.