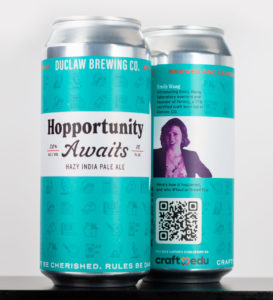 One Christmas, I decided to visit my sister in Denver, and I was getting an idea of what the altitude would do to my body, since I would be running my first marathon there.

The day after my Christmas, my sister invited me for a walk, and we ended up walking to a craft brewery alongside her dog, Walter the bloodhound. I’ve been to a ton of craft breweries, but this was so different. I enjoyed learning from the beertenders. It was just the most amazing time. I learned a bit about the beers, but there was an incredible community that I caught a glimpse of.

I ended up going back to Cape Cod, back to my regular job being a medical office manager. I sat there, and I thought, “I don’t want to be here anymore.”

I got into medical school, but I didn’t like the direction we were going in. It was about how much money we can squeeze out of people and insurance companies. There’s a lack of respect and care, which is not why I got into the profession.

At that time, I thought, “Maybe I’ll move to Denver and figure it out from here.”

I ran my marathon. For 26.2 miles, I had a lot of time to reevaluate my life. And two weeks later, I moved out to Denver. I just went for it.

I had a couple random sales jobs at first to avoid falling into the comfort of medicine, but no matter where I lived or worked, I always found my way back to a brewery.

I ended up house sitting for my sister, and went back to that same brewery we first went to.

If you do not know how to make friends, go to a brewery two days a week, and trust me, you will find your tribe.

I was working a regular job, but on the weekends, I got the opportunity to volunteer in packaging at a brewery. I ended up meeting my husband at the same craft brewery that my sister first took me to, and he owned a craft brewery. It all loops back together. It’s called Chain Reaction Brewing Company, which is apropos considering how so much of my life has been defined by moments there.

I began to help him out more, packaging and later in the tap roomSome have brunch dates on weekends, we had packaging dates. We got married in the brewery six months after we met. We ended up having a Corpse Bride themed wedding. We had friends that showed up as minecraft zombies and Ash from the Evil Dead with the chainsaw arm. It was a good time but I think most people didn’t take us seriously at the time.

About ten months later, we went on a date night, and we were talking about our futures. I didn’t like my job, but I really liked craft beer.

He sat there and wasn’t sure how long he wanted to keep the brewery going. They were  seeing no change in sales in taproom or distribution, and unless they got  a significant financial infusion, they were not going anywhere new.

I  thought, I miss being in a lab. Before medical, I used to bleed horseshoe crabs for endotoxins and after that I worked in the R&D laboratory for a major flavor company

He said, “You know, I always thought it would be really cool to do a craft beer laboratory.” We sat there on that date, and hammered out a bunch of ideas.

I texted him the next day, and was like “I’m still thinking about that thing we talked about last night, are you?” “Yep.”

That’s how Fermly was born.

Once we opened Fermly, I ventured to learn everything about the science of beer. We’re coming up on our three year anniversary this year.

I’m in the community, not as a beertender or brewer, but someone who cares deeply, and helps breweries make sure they are taken care of. Almost like when I was in medicine, but I can go above and beyond for an industry I care about without the limitations set by others. I can make a meaningful difference.

In light of recent events, I still maintain that it’s a very inclusive, open industry. Yes, there are issues.

>>Tap Takeaway:Emily is referring to the #MeToo reckoning that’s rocking the craft beer industry. Discouraged by sexist comments at work, Brienne Allan, production manager at Notch Brewing in Salem, MA, decided to launch Instagram account @ratmagnet, a space where women in beer were welcome to share their anonymous stories of sexual harassment. Making a tremendous impact, the account now has more than 62K followers, and has pushed many of the accused to step down from their positions, and breweries to turn their attention to HR policies on harassment. For resources, head to Brienne’s latest collaboration project, Brave Noise sitehere.

The entire craft beer community shows up. They are proactive about making this industry better and taking the necessary steps. They notice when a regular isn’t there. I mean, there are very few industries you can go to, and all of a sudden, so and so is fired but  we don’t notice them. People will sit there and talk through things, and they are willing to hear you out and make sure you’re okay. People will hear you out. For customers, but within the industry too.

I was sexually harassed at a brewery, and I had brewers ensure I was okay the entire time following that. I’ve been harassed in other industries, and they said, “suck it up.” The brewing industry is working towards not normalizing these bad habits.

The brewers made me feel like I was in a tribe, and they made sure I was okay. Being a consultant making sure they are okay too, is a wonderful thing.

I’d have to say, I’d love to see the community expand, and have that welcoming community. It sucks that we’re watching all the harassment now, but I know that we can do better.There are a few bad eggs, which we need to address . But, we have so much opportunity to continue to grow, to diversify, and because of the way this industry is, we can encourage education and give more opportunities that might otherwise not be available. We need to do more of it, like Garrett Oliver did with the Michael James Jackson foundation.

>> Tap Takeaway: The Michael James Jackson Foundation is a grant-making organization that funds scholarship awards to Black, Indigenous and POC within the brewing and distilling trades. Learn more about the organization here.

I was looking at my grades at school, I realized I was going to fail to survive this part of my life. Looking at the possibility of failure made me take that leap, and I did great in college.

That’s why I ended up becoming a medical assistant. I wanted to know that I could succeed in the medical field before taking on medical school. I struggled to find a job at first, and it was extremely challenging but at the end very rewarding. When I decided to make the leap for medical school, it was tough. So many failed interviews, and I was declined. I applied to 32 medical schools, and it was a huge financial burden, I got rejected from 29. You take tests, and screw up, and do something wrong and you will never get feedback on what it was, but you just have to keep going.

When I finally got an acceptance, I had to ask myself: Did I want to do it? Four more years, and student loans? I finally achieved this thing I was working towards for seven years, and it felt like I threw it away. One interviewer told me, “get used to failure, because you’re going to fail a lot.” Not a great sales pitch for a medical school, but it hit me right in the gut. I realized I was failing myself in holding on to this dream that no longer matched with who I had become in the journey to achieve it. I think this prepared me the best for jumping in to brewing and then in to Fermly.

Beer isn’t going to be perfect all the time. Your customer will not be happy. Your employee will be terrible. It’s okay, because you just have to keep pushing forward despite the setbacks. We definitely felt this with Fermly when COVID-19 happened. Our money dropped down by two-thirds. When everyone else was panicking, we just had to wait, and keep trying. It felt at times like we failed every day. But every day is a new opportunity to succeed.

I love my friend Alyssa, also known on Instagram at Southern Beer Girl and the head brewer at Jagged Mountain Brewing. She’s done so much, and worked so hard, specifically in the Denver beer industry to move forward with inclusivity, diversity, and talking about some tough topics that many people are still uncomfortable with. She’s an amazing brewer, person, and advocate.

The other person is the entire Bierstadt group. They have  a gigantic space, and figured out how to brew exceptionally well . They are resilient. Ashley Carter and Bill Eye , they’ve worked so hard at this. Their beer is consistent, it’s good, and  finally across the country.

The most memorable is honestly the Bierstadt Sloe Pour Pils . The first time I had it, I was like, this is amazing, I could drink it all day. I’ve had some of the best experiences because I’ve been able to sit and enjoy this beer. I drag everyone there. They only do a liter once a year on their anniversary and we make it a point to go.