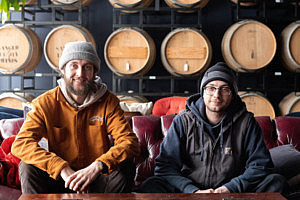 Say hello to Jake Hacker and Colton Phillips: The dynamic duo that runs our kitchen.

After working on the line for two years, the pair was promoted to take over Aslan’s food program and have been crushing it ever since. When asked how the two work together, Jake and Colton both gave a subtle smirk before collectively answering the question.

“We have different strengths”, explains Jake, “the things that I lack I think Colton compliments very well and vice versa”. Colton nodded his head, “Jake sorta nailed it”, added Colton, “We went into this kind of trying to do the exact same thing, which led to a lot of disappointment and arguing because, you know, we had expectations of each other and we wouldn’t meet them”.

The two refined their roles, deciding who would be in charge of what. Colton is known for his elaborate spreadsheets and expertise in all things numbers, while Jake is best known for rolling up his sleeves and really getting into the day to day operations. Not to say the two don’t interchange roles, but they are exceptionally good at accepting their individual strengths and weaknesses and using that knowledge most effectively in their work ethic.

This kind of teamwork and honesty isn’t built overnight. “I’ve known Colton since he was a little sixth grader” says Jake. “I dated his dream girlfriend,” adds Colton. Jake nodded his head, “it’s true”. Both raised in Olympia, the two have known each other since 2007. “We never really talked or really had a reason to.” explained Jake, “and then [after both moving to Bellingham] I was out one night and saw some old high school buddies, and Colton was one of them. We started talking”.

Jake at the time was working in the dining hall on Western Washington’s campus. “I wanted a better experience and more knowledge working with food” said Jake. “[Colton] said that he was about to become a lead over at Aslan and that he could talk to the chef about me”. After a month and a half or so of pestering Colton with follow up messages on Facebook, Jake finally received a call about a working interview. The rest was history!

Since then, the two have become wonderful friends and coworkers. Colton assuming the role as Aslan’s kitchen manager and Jake as the assistant kitchen manager. Even with these titles, the two expressed how it is of importance to them that everyone is viewed on the same playing field.

“We try to do [everything] against the grain … to be different and set the standard a bit higher and set an example for [the industry]” says Jake. “Treat everybody as fair as possible,” adds Colton, “and to do that without trying to make it seem like you are their boss. You know, I’m the boss, but I don’t want to walk into the room and have there be that slight terror or fear or anxiety. … it’s [important to] keep everybody happy. And that’s in terms of a safe, comfortable work environment, wages and benefits, and then to be proud of the products that [we’re] serving.”

Since taking over the kitchen a year ago, Jake and Colton have helped introduce over 60 new recipes to the brewpub- including menu items such as the beloved Chicken Katsu sandwich, Mac Bites, and the Korean Barbecue Tofu. And while they’re certainly pioneering the way, Jake and Colton are the first to admit their reliance on teamwork.

“We want all of our employees, our cooks, even front house people who don’t necessarily cook for a living to have a say” says Jake. “We try to listen to their ideas and their opinions and give them a shot. I think that’s honestly one of the happiest times is when someone else comes up with a dish and we can give it the green light to go onto the menu. I think that’s awesome when someone else’s idea comes onto a plate.”

Both agreed that this was one of the biggest perks of the job, amongst many other things. Not every day is perfect though, and these two had some pretty funny stories to tell about the good, the bad, and the downright ugly.

“I’ll tell you about my worst day” says Colton, “I was reassembling a sink”, recalls Colton. “Historically, the sink was never fully attached to the wall. That always bothered me. I wanted to fix it, so I took an extra long screw and drilled the sink back in.”

It was lunchtime in the restaurant on a fairly busy day. Everything seemed normal at Aslan. Unbeknown to most, chaos was brewing in the prep kitchen as a steady stream of water spewed out of the middle of the wall.

Colton had drilled a hole in a major pipeline.

An entire crew had assembled, all gathered around the sink. One prep cook was furiously squeegeeing the floor while another was attempting to capture water in a dish tub above him. Colton was drilling more holes (not sure who thought it was a bright idea to let Colton use the drill). Thankfully our on-call handyman and legend Don Trosset was there to help save the day, cutting through the wall with an electric saw and eventually resolving the leak.

“I totally thought I was gonna get fired” said Colton.

“That story is so good”, added Jake. “That day Colton called me and– I’m not sure if you can use this– but the direct quote was ‘If you ever think you f***ed up at work… just know that you did not f*** up as bad as I did today’”.

Minor floods excluded, we are fortunate to have employees like Jake and Colton, who consistently put in the time and effort it takes to raise the bar for the restaurant industry. If anything remains true, it’s that these two keep this place pretty interesting.