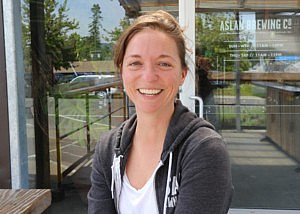 Aslan’s Director of Human Resources. Shanna has been with us since we first opened in 2014- six years ago! “I was [Aslan’s] first interview, which was really funny” says Shanna, “I wrote an ode to beer on my cover letter and I think that really helped me stand out”.

Originally hired as a server and beertender, Shanna grew into larger roles as the brewpub grew- eventually landing herself in the HR position 3 years ago. A role she created for herself.

“I never thought about doing HR before… right before I got the job here I was going to go into nursing which is what my undergrad was geared towards” states Shanna. But as time went on she found herself take on a sort of ‘liaison’ role, acting as an unofficial HR Manager before Aslan was able to help create the role for her.

“I actually suggested it” says Shanna. “Having been someone that’s worked in hospitality for 20 plus years and been an employee for multiple employers, It’s really cool to feel like I have a platform to fight for employee rights and that it’s received really well by ownership. They want that too.”

”I just like to be someone here for our employees to talk to” she adds.

In her 6+ years with us, Shanna has devoted her time to learning the inner-workings of Aslan– describing herself as a bit of a generalist. “I do a little bit of everything” she says, “that’s helped me really learn everything in a ground-up sort of way”.

“My problem has never been finding what I like… It’s honing in on one thing. That’s my problem. I like a lot of things”. This coming from the woman who just finished writing an entire horoscope section in our upcoming brewpub newspaper, based off of actual research and her random but astonishingly thorough knowledge of the Zodiac signs.

In tune with this, Shanna also partakes in improv and juggling. “I haven’t juggled in years but I used to juggle quite a bit. I can juggle balls, I have clubs, and I have fire clubs but I don’t light them on fire anymore because I’m not very good at that…”

“I need to get rid of those fire clubs” she adds with a chuckle.

Shanna also enjoys less extreme activities. Since the pandemic hit she says she has particularly enjoyed cleaning her house, cooking, and spending time with her dog. She also spoke briefly of her dream to start a podcast in the near future.

To simply sum Shanna up as multi-faceted would not do her justice. Shanna is many things in life and here at Aslan, whether that be a friend, coworker, mentor, HR Manager, or in-house astrologist. She is equal parts empathetic and diplomatic– always lending an ear to each and every employee and looking for ways to continuously help us improve our work ethic and work relationships.

Shanna is described by her colleagues as compassionate, loyal, genuine, hilarious, attentive, humble, wise, patient, and oh so kind. We are incredibly lucky to have had her on our team for the past 6 years.

When asking Shanna if she had any final thoughts during her interview she answered “This is a really special place with lots of special people”. We agree Shanna, and we think you’re a big part of what makes Aslan so special! Thank you for your hard work and dedication to this team. We are so thankful to have you.