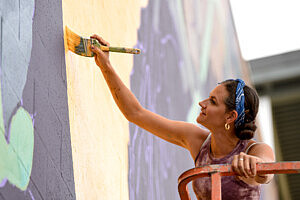 https://troegsblog.wpengine.com/wp-content/uploads/2021/10/MuralTimelapse-1.mp4Spiders, heights and long nights –
a Q&A with local artist Jacintha KrucNoticed anything different about us lately?

If you’ve driven west past Tröegs on Hersheypark Drive, you’ve seen it.

Maybe you even saw it coming to life, growing day by day, taking on new shapes, new colors and new layers.

The 120-foot-by-30-foot mural that now adorns the east wall of our Hershey brewery is a celebration of the local ingredients we use to brew some of your favorite Tröegs beers.

There’s the honey we add to legendary holiday ale Mad Elf. The Pennsylvania grain that forms the backbone of beers like Troegenator, Field Study and LolliHop. A bine of local hops that might end up in a Scratch beer. And Fruit Belt peaches and cherries that add a sweet-and-sour pop to some of our wood-aged Splinter beers.

Although it seemingly sprouted up overnight, the colorful mural was a long time in the making and largely the result of one artist’s vision, patience and persistence.

“I’ve always been into art,” says Jacintha, who splits her time between Harrisburg and Philadelphia. “I have a really large adopted family. Lots of foster kids. And I was home-schooled. Making art was my outlet.

“I got into murals through scene painting for a community theater in Castle Rock, Colo. I studied a lot of art history and museum science in undergrad. Then I wanted to make it to the East Coast. With the culture and support for the arts, this is where I knew I could thrive. I wanted to be pushed more.”

In 2013, Jacintha earned a master’s in fine arts from the Pennsylvania Academy of the Fine Arts in Philadelphia, and ever since, she’s been full-speed ahead blurring the lines between functional and fine art.

“I like things that are artfully made and utilitarian and inclusive,” she says. “The murals that I paint are not mine. They belong to the community. I want to bring art to places anyone can access art. Not everyone feels comfortable going into a gallery or museum, and murals are accessible to everyone.”

Your work has a lot of motion and dramatic flourishes. Where does that come from?

Decorative arts are a big influence. I work in historic preservation and conservation in a lot of buildings from the Art Nouveau and Art Deco eras – the 1920s, 1930s. There’s drama, movement, asymmetry, structure. Lots of flowers and geometric shapes.

A lot of that was whitewashed over in the ’70s, so often what I’m doing in my restoration work is restoring the original finishes.

I also used to paint a lot of theater sets. That really prepares you for painting on a large scale. Up close you might think you have a lot of contrast. But from far away, you don’t see that. Everything gets hit with lights and gets washed out, so you have to be more extreme than you think to make it readable from far away. On the flip side, I also like to add detail so you can have some fun when you’re up close.

With this mural, every day I would take my drawing and go stand in the back of the parking lot to compare it to what was taking shape on the wall. See what I liked, what I did’t like, and what needed to be pushed even more.

How did you start this project?

It was daunting. This is the biggest mural I’ve ever done. I went to your website and looked at what you guys have going on visually. I noticed your art was graphic and playful, so I tried to be playful in the design.

I started with a rough outline, big circles where the peaches would go, the cherries. Then I did a more detailed sketch and digitized it on my iPad.

Usually I show a few ideas, but with this, my first sketches felt good and got the OK. I worked in all the ingredients – honey, peaches, cherries, grain, hops. And the idea of keeping it airy and light was right up my alley. I threw in the cherry blossoms because I do flowers whenever I can.

I took a week off from my restoration work and would get here around 7 in the morning and stay until 7 or 8 at night. I had no idea how long it would take me, and it’s hard to know when to stop because I could just keep going forever. It went faster than I thought, about 13 days total.

Any surprises while you worked?

The first day I was really anxious. How will this project go? Do I have everything I need? How will the paint flow? I had some artist friends that came out for the first couple days to help me lay it out and mix some paint. Marie Manski and Megan Webb. The first thing we did was lay it out with purple paint. That first stroke tells me everything, and that went pretty smooth.

I love heights. I’m very comfortable on a lift. If I wasn’t an artist I’d love to be a pilot or something. But I’m always self-conscious. It’s a little vulnerable to have your work in progress out there for the whole world to see and have a snap judgment. It’s kind of like a Bob Ross painting. I know the bigger picture in my mind, but people have to be patient for it.

I did get to meet a lot of your regulars, and a lot of them are very creative. I like how many families come to Tröegs. I would ask all of the kids that go by what they like to paint.

At night, there were lots of spiders. They would make webs while I was painting. I let most of them hang around, except for one. He was HUGE. I put him in a cup. During the day there were bees. It was fun to see them on the honey.

What’s next for you?

I’m going to paint a mural at a clinic in Lancaster. I really like to work in hospitals. It feels like a use for art. I get to know all the staff and the patients and try to give them something comforting. It’s an opportunity to give someone an escape or make them feel a little better.

And I’d love to get accepted to a mural fest in another country. You get to connect with muralists from all over the world and geek out. Murals are an exchange. And I love that.