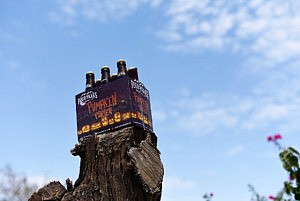 Tired of this heat, this virus, and this summer in general? Us too. That’s why we’re releasing Pumpkin Porter one month early and officially declaring summer 2020 over and done with. The beer will be available in grocery stores and independent bottle shops throughout Arizona beginning Monday, August 3, and will be landing in Nevada and New Mexico shortly thereafter.

“By any measure, summer 2020 has sucked,” says Four Peaks co-founder and head brewer Andy Ingram. “So we’ve decided we’re just going to skip the rest of it and go right into fall.”

The August 3 release date is by far the earliest ever set for Pumpkin Porter—and possibly for any pumpkin beer. But to beer lovers throughout the Southwest, the beer’s annual release signifies the beginning of autumn and a welcome shift toward cooler temperatures and the holiday season. By releasing it early, we’ve effectively ended summer. You’re welcome.

“At this point, everyone’s over 2020. We just want the year to end. We may still have a few months to go, but at least summer’s over now that Pumpkin Porter’s out,” Ingram says.