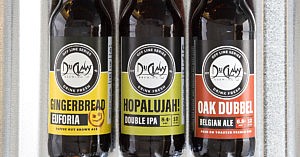 In 2016, our never-ending quest to expand the boundaries of brewing lead to a collection of events built around a new series of beers designed to be consumed in their freshest possible state. “The Offline Series” is bottled immediately after conditioning, packaged while you wait, and sold directly from the conveyor belt to give you the freshest beer-drinking experience possible.

The only way that it could be fresher is if we let you suck beer directly from a bright tank sample port. Please don’t email us asking to let you do that.

We had such an amazing time hosting the first three events and drinking the Offline Series beers – our 20th Anniversary Double IPA Hopalujah, a French Oak-aged Belgian Dubbel, and the winter holiday variant of our beloved toffee nut brown ale, Gingerbread EuForia – that we’re continuing the series in 2017.

Check our events schedule for dates and details so that you don’t miss the 2017 Offline Series events and beers, and your chance to drink our beer in its freshest possible state – right off the bottling line!