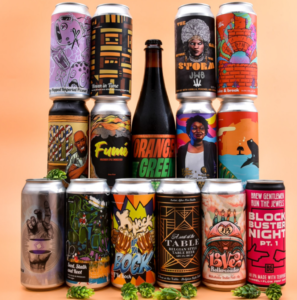 This is your chance to bring the festival home and join the national movement to foster more diversity and opportunity in the craft beer scene you love.

The only other place you’ll be able to get your hands on all of these beers is at the Barrel & Flow Fest itself in Pittsburgh this September!

Last year, we were proud to help Fresh Fest — the nation’s first black-owned beer festival and USA Today’s #2 Best Beer Festival in the Nation — go digital for the first time.

Now, Barrel & Flow Fest 2021 has a new name and is poised to be bigger than ever as it showcases some of the best brewers in the country and strives to make the industry more inclusive. We once again teamed up with festival founder Day Bracey and other participating breweries to offer a taste of it all!

This special bundle has 15 collab beers from 33 incredible breweries (and one hip-hop duo!), many black-owned and operated.

Tröegs Independent Brewing (Hershey, PA) x Harris Family (Harrisburg, PA) x Mack Brewing (Philadelphia, PA) — Dry-Hopped Imperial Pilsner – 10.4% ABV
This big beer revamps what you thought you knew about the Pilsner style by revving up its biscuity malt flavors with citrusy hops and a massive ABV. The can art comes from local artist Tristan Bond, who fittingly lives by the saying, “Be Vibrant.”

Download the Tavour app, order your bundle, and clear out some fridge space!