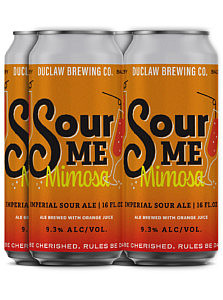 Bine? Weer? Carrying on from an old Belgian tradition American brewers are smudging the lines by adding grape juice to the beer fermentation process. And the results are tasty.

The process of adding multiple sugar sources, in this case wort (for beer) and grape juice (for wine), is called co-fermentation. A plain wort is fermented and a secondary fermentation takes place after the grape juice is added. This usually bumps up the alcohol level and adds additional dryness and tartness to the mix. Barrel-aging is then used to smoothen everything out. These hybrids — also known as co-ferments — are hardly anything new, reminiscent of Belgian lambic beers which often contain seasonal fruit in the brewing process to add flavor.

“I see it as [the] next step of beer. Our motivation and inspiration was the wine world. We’re inspired by beautiful natural ferments using indigenous yeasts. It was kind of striking [how] similar the character of those wines were with some of our beers.” said Jeff Stuffings, cofounder of Jester King brewery, an award-winning Texas Hill brewery that started with a barrel aged sour ale and never looked back.

The best wort is a simple wort, according to Jim Crooks, Firestone Walker master blender, “I like to use something almost devoid of any characteristics, the base wort that we make and use for these beers. Because the juice is so delicate, the aromatics that you’re trying to keep in the product, you don’t want those competing with a heavy malt or any bitterness. So the canvas that we lay down for mixes really simplistic but the grain ratio, there’s hardly any hopping going on.”

The flavors and aromatics that come out of hybrids are heavily dependent on the type of grape used, and as a result there are some hiccups. Like in a lot of natural wines, spontaneous fermentation occurs, which doesn’t always go the winemakers way. Co-ferments are no different. Wet dog, hairspray and acetic acid (the acid present in vinegar) are some of the common off-flavours that can result due to the lack of control of the fermentation. “It’s like the total opposite of traditional lager production where you’re controlling every last aspect of the beer when the beer is controlling you,” elaborates Stuffings.

Sulfur is an ingredient often used in winemaking as an additive to kill off active yeast and stop fermentation. The result is sulfites and is a contentious area in the natural wine world today. Chris Wood, director of operations for Baltimore-based DuClaw Brewing Company, says that sulfites are always a consideration when getting wine juice. “If you do have sulfites in the wine juice, it could affect your fermentation. It’s not good practice to use sulfites in beer making so you have to be careful who your supplier is.”

Crooks wants to eradicate distinctions completely, outlining a dream where a clear wine bottle full of cloudy liquid would be called beer, “blur the lines between wine and beer, so people don’t know what it is. It’d be really cool to get a new classification.”

“We’re all striving to learn from winemakers and push the boundary of what’s been done. There’s a whole new renaissance that’s happening winemaking right now, there’s these interesting forays into these old world techniques of making wine. The people that are involved, we’re all geeks and we’re all geeking out on winemakers now.”

Top co-ferments to look out for: