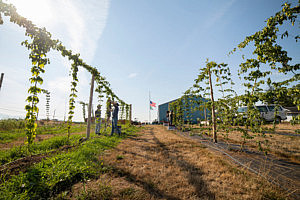 Growing Veterans farm and Aslan worked together to grow hops, harvest, and brew a special release beer called the Charlie Foxtrot IPA, which will be released on September 29th at a public event, the Fresh Hop Forum, at the Aslan Depot. A portion of the proceeds on all wholesale and in-house sales of Charlie Foxtrot Fresh Hop IPA will be donated back to Growing Veterans.

“Aslan Brewing’s guidance and support over the last year has been instrumental in the development and success of Growing Veterans Organic Hops program. We appreciate the opportunity to work with a local business that is committed to using organic ingredients, locally sourced goods, and sustainable practices,” said Scotty Irwin, Programs Director at Growing Veterans. “We look forward to expanding our organic hops program and future collaborations with Aslan Brewing Company.”

Growing Veterans offers a new health care model that combines informal peer support with care farming. They create a safe space where veterans work together, support each other, and engage with their communities to have a successful transition home. This community interaction also lessens the divide between veterans and civilians. The model is helping achieve their mission “To empower military veterans to grow food, communities, and each other.”

“We chose to work with Growing Veterans because of their ability to directly impact people in need,” said Jack Lamb, CEO of Aslan. “We owe a lot to the veterans of this country, and yet they are often distanced from the resources they need to live a healthy life after service. No matter how you may feel about war or the military in general, we must understand that veterans deserve our help, just like any other active member of our community.” Since its opening in 2014 Aslan Brewing Co. has aimed at becoming a socially influential business in downtown Bellingham. Through its sustainability practices, non-profit donations, and community outreach Aslan has made a continued effort to lead by example.

“Growing Veterans is a model for what a motivated nonprofit looks like,” said Lamb. “They have found a way to not only make a difference in the lives of veterans, but to do so in a productive, creative, and interactive way. Through this collaboration, we will raise awareness for veterans in need and bolster Growing Veterans’ ability to help those very men and women who have always had our backs.”

Growing Veteran’s vision is to make an impact on veteran suicide by targeting the root cause: isolation. Using the farm as the platform, they provide a space where veterans can work together, support each other, and engage with the broader community to have a full and successful transition home.