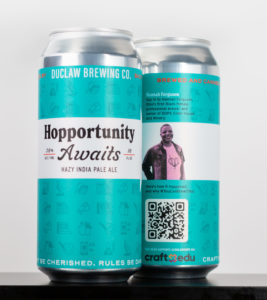 *Hannah was on the MOVE in this interview, coming to us live from her car with her dog, Nova Roe, who is about a year old, an American Pit Bull, and according to Hannah, a spoiled brat. Today, they are skipping doggy day care to pick up juice for hard cider.

I’ve been a home wine maker for the past ten years. Within the past six years, I got interested in craft beer and drinking.

With my background in wine and cider, I got very curious about the beer industry. I wanted to know how it was made.

At the time, the brewery I was working for was in the process of opening. I met the owners, and told them I wanted to learn about craft beer. They invited me to a few brew days, and asked if I wanted to help with brewing. One day, a position opened up to be an assistant brewer.

They reached out to me, and I didn’t even know if the position was open. It was an addition to what I was doing with wine and cider, and it was something I fell in love with. It was about asking questions, willing to ask questions, and learn more.

What do you love about the craft beer community? Where would you love to see it grow or improve?

Looking at the past few years, it’s grown tremendously.

My small area where I live, the growth from seeing zero craft breweries to seeing four to five, and being within driving distance. The growth on social media, and also seeing more people that look like me, more women in the industry. That is huge.

Last week, in Atlanta, this woman did a craft beer conference, and I went to Atlanta and was on one of the panels. This was my first time in two years meeting these people in person, as we only met previously through social media.

I would love to see more diversity at conferences and beer fests. The majority of events I go to, I can count the people of color on one hand. Not a lot of women either. I would like to see it become more diverse, but you have to be intentional about that diversity.

Maybe you invite groups in your area that are primarily POC to the festivals. It’s a learning curve, but that definitely has more potential for us to do more, and make more of an impact that way. More panels and podcasts would be helpful, too.

My background, even though it was different between beer and wine. It helped with my role as an assistant brewer, because I had some knowledge of how things went. YouTube helped me a lot, and research is great. Plus, being open and willing to learn.

Being an adult, I stepped into that industry, I think I was in my mid-thirties, and it was becoming that sponge of knowledge, trying to retain everything. There was a lot going on, but it was important to be patient, and not get frustrated.

My brewery  took a chance on me with my lack of knowledge. For anyone looking to go into this industry, you hope that you would be given a chance too.

There’s a few. Garrret Oliver, he’s the master brewer of Brooklyn Brewery, I got to meet him. I fan-geeked out a few months ago when he started following me.

Celeste Beddy (first black female brewery owner in the US); I got to meet her a few months ago, and that was amazing. I admire, and look up to her.

I also love what Beny Ashburn & Teo Hunter of Crown & Hops are doing.

Our can art was done by an amazing local artist, it was very bold, and stood out. It sold out fast, our merch sold out, and everyone loved it, even in the middle of a pandemic.

Bonus: Tell me a little bit about the DOPE Brand.

I started that back in 2017, it was mainly me being in my 30’s, and I was like hey, I want something different to do. I thought of how I could bring big city activities to our small city.

For example, open mic nights and poetry nights were things I was interested in that weren’t centered around getting drinks. It was different, and we could get the community involved.

The word “dope” was mainly in the 80’s, and it’s here to stay. But I wanted ‘dope’ to mean something. I reached out to my brother who’s a poet, and he came up with Dwelling on Positive Energy. It encompasses me and what I want to do.

With DOPE, we’re meeting in a common ground of beer, wine, and cider, we’re spreading diversity in a positive way.

DOPEbrands, LLC isn’t just a cider and wine manufacturer, but a lifestyle brand that takes pride in creating unique connections and experiences through cider and wine. Check it out here.