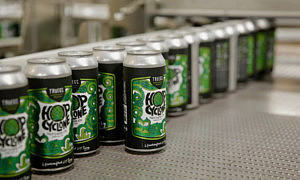 It’s time for one of our most sought-after limited releases: Hop Cyclone Hazy Double IPA.

Hop Cyclone’s haze is built with a grain bill of pilsner malt, Vienna malt and wheat. The haze helps prop up hop oils that would normally fall out during fermentation.

Speaking of hops, Hop Cyclone gets a combination of Citra, Sabro, Sultana and Simcoe. And London-3 yeast ferments this big Double IPA and also boosts the tropical notes.

Hop Cyclone gets its name from a dry-hopping system we have here at Tröegs. During fermentation, we pull out a portion of beer and with our Hop Gun, we dose in hops to create a densely hopped mix. That mix is then pumped back into the fermenter, and we repeat the process until all the hops that the recipe calls for have been added. To make sure the hops are thoroughly spread throughout the batch, we use our Hop Cyclone technology to churn the fermenters and make sure those oils hit every last drop of beer.

The art for Hop Cyclone was conjured up by Art of Tröegs alum Devin Watson. If you’re a fan of our Double IPAs, you’ll remember the Candyland-inspired art he did for LolliHop. “I call myself a design parrot,” says Devin. “I can take a lot of styles and be fluid with them, make them my own. For the Hop Cyclone label, I imagined these groovy ’60s hop graphics and seeing them swirl all around the can.”

Hop Cyclone clocks in at 9% ABV and is available on draft and in 16-oz. cans wherever Troegs is sold. With heroic hop flavor and low bitterness, this once-a-year Double IPA will disappear without warning. Don’t miss Hop Cyclone!

Find Hop Cyclone near you at troegs.com/brewfinder.