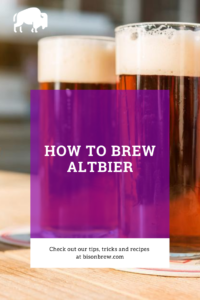 Refreshing. Complex. Crowd pleasing. Altbier is one of the most underrated styles that threads the needle between crisp lager and malty amber ale. What’s even better is that the style is relatively easy to brew. Since Altbier is fermented with ale yeast, homebrewers of all levels can brew amazing tasting interpretations in just a few weeks.

Using a bit of caramel and roasted malts, along with a base of Munich and pilsner, Altbier has a robust and malty body. Distinctive noble hop profile balances out the aroma and flavor, going down with a super smooth and clean finish.

What is Altbier?Hailing from Düsseldorf, Germany, Altbier can be considered a rival of nearby Cologne’s Kolsch. Where Kolsch is a bright, refreshing, and crisp blonde ale, Altbier is maltier, richer, and dark. They’re both fermented with ale yeast but at slightly cooler-than-normal temperatures. This gives a lightly fruity, but still very clean fermentation character.

In German, Alt directly translates to “old”. In this case, old refers to an old style, rather than an aged beer. Before the widespread use of bottom fermenting lager yeast, all German beer was top fermented, meaning made with ale yeast. When lager yeast gained widespread use in the country, traditional ales waned in popularity. Altbier, like Kolsch, is a rare German ale that’s still brewed today.

Altbier, historic as it is, hasn’t received a ton of commercial attention outside of Western Germany. There are a few breweries around the U.S. with great examples of Alt. Seek out KC Bier Co. Altbier, Alaskan Brewing Co. Amber, and Estimation by Suarez Family Brewery.

As Altbier isn’t the easiest beer style to find outside of Düsseldorf, it might be tricky to fully understand the flavor profile. I’d say it’s similar to a California Common, like Anchor Steam, but with a noble hop character rather than the minty, grassy Northern Brewer profile. Altbier lies somewhere between a Vienna lager and a Porter. It’s very refreshing but packed with malty, roasty complexity backed by mild yeast esters.

What makes a good Altbier?Crafting a perfect Altbier takes an eye for detail and a restrained approach to recipe design. Balanced bitterness, sweet maltiness, and a faint fruitiness comes together for a beer with character. A base of pilsner malt and dark Munich forms a crisp backbone. Roasted and caramel malts, like CaraMunich and Carafa, add roasty and caramelly overtones.

A dry finish from a specially selected, highly attenuating ale yeast allows for a restrained noble hop profile to mesh with light esters.

Altbier has a decidedly dark colored body, ranging from light amber to a dark copper, almost brownish hue. Altbier is usually clear thanks to extended cold conditioning, but darker versions might not let that much light pass through.

Like Kolsch, Altbier is a difficult style to perfect. With such subtle flavors all fighting for a space, the synergy of each component needs to harmonize evenly. There is a distinct bitterness in Altbier, perhaps more so than many other German styles. Still, though, Altbier wouldn’t be classified as a bitter style. Sweet malt flavors should always be present to soften the profile.

How to brew AltbierAltbier is an unassuming style but brewing one takes a few uncommon ingredients. For the best results, you’ll want to source fresh ingredients. A trip to your local homebrew store might be in order.

We’ll take you through what to look out for when selecting ingredients and designing your Altbier recipe.

GrainFor best results, you’ll want to use German base malts like Weyermann Pilsner and Dark Munich. For the rich carmelly, toffee note, a German caramel malt like CaraMunich is a great bet. I like to use a debittered black malt, like Carafa II, to add a touch of deep color and light, roasted complexity.

Altbier has a malty body without being cloying or overly sweet. While a darker and roasty Alt is amazing year round for a complex and rich brew, sometimes a lighter and crisper version is welcome.

Here are some ideas for Altbier grists from a lighter interpretation to a darker version:

You can also get amazing results with a single infusion rest. We like to mash around 152°F for a bit of extra body and mouthfeel while still producing a highly fermentable wort.

Altbier is also a great option for extract brewers. Most extract beers have a malty, darker profile by nature of the malt extract. Steeping a small amount of crystal malt and roasted barley can give the sweet and roasted flavor required in Altbier.

HopsGenerally speaking, stick to German hops when brewing German styles. Altbier should have pronounced hoppiness in bitterness, flavor, and aroma. Use only good quality hops and stick to noble hops for late additions.

For bittering, a 60 minute addition of German Magnum or Perle are good choices for their higher alpha acid content. A 15 minute addition of Tettnanger, Spalt, or Hallertauer will provide a beautiful layer of herbaceous complexity.

Bitterness should be kept to about 30 to 50 IBUs from hop additions at 60 and 15 minutes.

For a dry yeast option, try Safale K-97. It’s a Kolsch yeast but produces the fruity esters required in Alt. If using this strain, pay close attention to the fermentation temperature. Keeping it cold (around 62°F) is a must to limit the wine-like fruitiness typical of Kolsch yeast.

Fermentation ProfileAltbier yeast performs best between 62°F and 66°F. Ferment at 62°F for one week and raise to 66°F for an additional week to allow the yeast to fully attenuate.

Lager the beer, either in the fermenter or keg/bottle, for at least 2 weeks at near freezing temperatures. The longer you condition Alt at cold temperatures, the smoother and crisper it will be.

WaterIn Düsseldorf, brewers use water that is relatively hard with a high carbonate level. The Düsseldorf profile is approximately as follows:

Ca Mg Na Cl SO4 HCO3 90 ppm 10 ppm 45 ppm 80 ppm 65 ppm 220 ppm Always start with great tasting water and make sure it doesn’t have chlorine or chloramine. If needed, treat the water with a campden tablet or carbon filter to remove these chemicals. Find out more about water adjustment in our water chemistry guide.

Altbier RecipeThis recipe is on the lighter side. Expect a rich, nutty malt profile but with a dry and refreshing finish. The hop schedule gives balanced bitterness with a late addition to carry through floral notes from the Hallertauer.

Final ThoughtsAltbier is a style that bridges the gap between lager-like drinkability and malty, rich, amber ale. It’s a great option to have on tap at home since it caters to a wide audience.

Unassuming and criminally underrated, Altbier is a style worth brewing. You’ll find yourself going back to the beer time and again, making small tweaks in search of perfection. It’s a fun style to make and a crowd pleasing option to always have in your fridge.