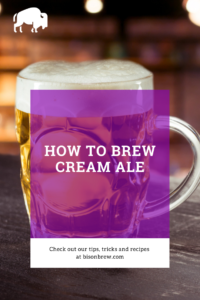 Sometimes you need a thirst-quenching and refreshing brew. Actually…make that most times. If you’re looking for a beer that you can keep on tap year-round and one that is especially satisfying on warm days, Cream Ale is your friend.

What is a Cream Ale?Cream Ale is an American style light ale. It can actually be brewed as an ale or a lager.

What Makes a Good Cream Ale?The classic commercial example of Cream Ale is Genesee Cream Ale. It pretty much sums up the style for me. It’s a clean, crisp beer with enough malt and hop flavor to keep it from being boring.

In the words of Josh Weikert in his article on Cream Ale, “Think “good American lager, but not a lager” and you’ll be well on your way”. Certainly, Cream Ale shares many similarities with American lager in terms of hopping levels and grist. It’s probably safe to say that most Cream Ales are brewed with an American ale strain. Therefore, they typically have a higher fruity ester concentration from both yeast type and fermentation temperature.

It may be disappointing but Cream Ale doesn’t have cream or lactose in it. Possibly, it gets the title “cream” from the use of corn as an adjunct. Corn can add a sweet-ish flavor that could be perceived as “creamy”. But that’s a stretch. Certainly lactose and vanilla or anything that smacks of Cream Soda doesn’t belong anywhere near a great Cream Ale.

The ideal Cream Ale has some mild fruity esters, moderate American hop character (think Cluster) and is dry in the finish. In my opinion, you should also find the distinct corn-like-light sweetness somewhere in the mix but this beer is far from being truly sweet. To be clear, this beer is not sweet but can contain the impression/perception of sweetness from the corn paired with the esters.

How to Brew Cream AleLet’s take a look at what it takes to make a great Cream Ale from grain to glass.

Grain BillMany great Cream Ales are brewed as all malt beers. Still others include rice or sugar as a part of the fermentables. You certainly have some flexibility here in choice. For simplicity sake, I like using table sugar at 250 grams (about a half pound) for a 5 gallon batch. That, with about 9 – 10 pounds of Pilsner malt or a basic 2-row base malt will get you where you wanna go in terms of starting gravity.

There are those that swear by the use of flaked corn. And some prefer rice. I say try them all and decide if they’re worth the effort. Either way, some adjunct should be used to achieve the appropriate low final gravity and perceived dryness.

HopsKeep the hops to no more than two additions. Magnum for bittering is easy and a favorite of Drew Beecham’s. He follows up the bittering addition with a bit of Willamette at 15 minutes. You want to end up at about 20 IBUs.

If Magnum and Willamette aren’t your thing, I think Cluster is the perfect all-American hop and the perfect addition for a Cream Ale. It was very likely used in pre-prohibition versions of the style. Again, a 60 minute bittering addition and a 5-15 minute “flavor” addition for a total of 20-ish IBUs is perfect.

*The reality of adding hops anytime during the boil is that it is more like a “flavor reduction addition”. This is due, primarily, to hop oil volatility.

YeastThe most common choice is US-05 or another Chico strain variant. If you’re looking to mix things up, try a Cal Common or Kolch strain. Some say lager strains are fair game but it’s a bit odd in my opinion. After all, it’s called “Cream Ale” not “Cream Lager”.

You want to use a good attenuator and end up at 1.006 – 1.012 for your final gravity. Keep in mind that you can adjust the expected final gravity by tweaking things during the mash too.

WaterUse a balanced water profile with the low overall salt and mineral content. Neither the hops nor the malt are really trying to outshine the other so your Chloride to Sulfate ratio should be close to 1:1.

As a reminder, make sure you’re using water that is chlorine and chloramine free!

MashMashing lower will help you achieve your desired final gravity. A single infusion mash at 151 F (66 C) for 45-60 minutes will work swell. You could mash lower or a bit higher and still end up with a great beer.

A step mash wouldn’t be out of place here either but unless you have a shiny setup it probably just more work than it’s worth.

FermentationUnless you selected a lager strain, ferment on the cool side of your yeast strains recommended temperature range. If using US-05, 62 F (16.6 C) is a good starting place for pitching. Let it rise naturally to no more than 64 F (17.7 C) to avoid excessive esters.

After a few days of primary fermentation, you can let your ale fermentation get even warmer. I like to do this but it’s more of the psychological comfort that I’m giving my yeast an extra boost so they can finish strong.

The reality is, healthy yeast will clean up well even without a diacetyl rest or the like.

Carbonation and Clarification2.3 – 2.8 volumes of CO2 is appropriate for the style. I like mine on the fizzy side as it adds to the thirst quenching sensation. Shoot for the high side or carbonation.

Use kettle finings, gelatin, time, or a combination of all three to get a crystal clear beer. Cream Ale is a style that will come across as cleaner on the palate if it is visually “cleaner”.

Final ThoughtsWhen I first heard of Cream Ale, I thought it would be a delicious creamy beer with hints of vanilla. I was admittedly disappointed that it was basically just another light lager disguised as an ale.

Now, I’d like to think that my tastes have refined and I’m abhorred by the thought of vanilla or lactose in a beer as clean, crisp, and crushable as a Cream Ale.

If you haven’t yet, join in on the all-American tradition and brew up a batch of Cream Ale.