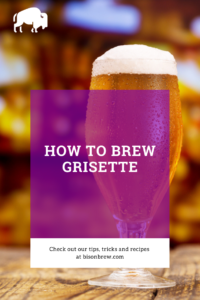 Grisette has seen a massive resurgence in the last few years. The enigmatic style, once almost erased from existence, is often misunderstood. We’ll clear up some misconceptions about Grisette and let you know how to homebrew your own delicious version.What is a Grisette?

Grisette is a light bodied, highly effervescent, very pale Belgian table beer brewed with wheat. It’s a historical Belgian style dating back to the late 18th Century. Closely linked to Belgian Saison, Grisette was brewed to be a refreshing, thirst-quenching beer for Belgian miners after a long day’s work. Where Saison is said to have been brewed for farm hands, Grisette was brewed for coal workers during the industrial revolution.

Stylistically, Grisette should have a very pale straw color with an alcohol level between 3 to 5% ABV. Bitterness is restrained but present, around 30 IBU, but late hopping can give Grisette a beautiful floral complexity.

The Grisette style was all but lost during the rise of industrial brewing practices throughout Belgium. Because of this, historical brewing records are scarce. A full and detailed historical analysis of our modern idea of Grisette can be found over at Dave Janssen’s blog, Hors Catégorie Brewing. He’s done the brewing world a great service with his thorough research into the style.

Today, Grisette is generally thought to be a light bodied, low alcohol, highly effervescent saison. Often fermented with a blend of yeast and bacteria, modern Grisette can be slightly sour and funky. Clean versions are also common and thought to be more traditional. The common thread is a 3% to 5% ABV, straw colored blonde ale with peppery phenolics and distinct fruity Saison-like esters. Carbonation should be very high (at least 3 volumes of CO2), which adds to its refreshing drinkability.

Bottle conditioning is almost a requisite for the Grisette style. Not only is this traditional, the natural carbonation promotes head retention, which can be an issue with these low ABV beers.

The tips in this article are based on my experience brewing Grisette, sampling of modern examples, as well as insight from Dave’s research.What makes a good Grisette?

Bright and crisp, Grisette should first and foremost be refreshing and easy to drink. The highly carbonated body, present hop bitterness, and dry finish further this drinkability.

A rustic grain character, from the use of undermodified 6-row barley and wheat, offers a grainy, crackery, and soft malt backbone. Floral and herbaceous layered hop expression can range from subdued to prominent. That said, hops should always be used in moderation. Expressive yeast character should come in the way of fruity esters and lightly spicy phenolics.

Modern examples are often fermented with a mixed culture of yeast and bacteria. If so, light barnyard funkiness may present itself, especially in aged bottles. Acidity, in the form of lactic acid, can be a nice element but is not required, or traditional, in Grisette.

Traditional Grisette is not thought to have been acidic or funky. Even if fermented with a mixed culture, since they were consumed fresh, Grisette’s profile would traditionally be closer to a clean Saison. There would not have been enough time for the bacteria to sour and/or funk the beer.

The key to a great Grisette is its drinkability. It’s a beer meant to be drunk after a hard day’s work, to be consumed quickly and in quantity.How to brew Grisette

We’ve covered How to Brew Saison, and many of those principles apply to Grisette brewing. Where Grisette differs is the lower alcohol and high percentage of wheat.

The grist of a Grisette should be relatively simple. Pale barley malt – traditionally 6-row – and a large portion of wheat, both malted and flaked. Shoot for about 70% barley and 30% wheat.

Using modern, well-modified malts, a single infusion rest will be your best bet for the mash schedule. Mash on the low end, around 147°F for a very fermentable wort. We’re looking for a very dry finish with Grisette.

If you have a source for under-modified malt, go ahead and use that for an even more traditional recipe. Just be sure to employ a step mash to achieve full conversion.Hops

For American substitutes, Willamette and Liberty hops would make a fine Grisette.

Since Grisette is usually drunk fresh, I like to take advantage of late hop and dry hopping to infuse brighter hop flavors and aromas. Don’t go overboard – Grisette isn’t a hop-forward beer style, but with a restrained approach, late hopping can add a beautiful layer of complexity.

Generally, you should aim for 30 IBU from a 60 minute boil addition. Dry hop with about ½ ounce per 5 gallons for no more than a week. A little goes a long way with such a light and delicate body.Yeast

Grisette should be fermented with an expressive yeast strain at elevated temperatures. Most saison strains work perfectly. Witbier strains are also suitable candidates.

For fermentation temperature, 75°F is a good place to start but you could go as high as 85°F if more pronounced esters are your goal.Grisette Recipe

WY3726 – Farmhouse Ale or your favorite saison or witbier strainSteps