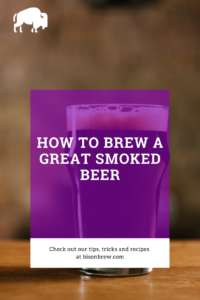 Smoked beer can be polarizing. While some people love it, others can’t stand it. Is it an acquired taste? Or are there not enough great quality smoked beers available on the market? We’re here to shed some light on this often misunderstood area of brewing.

With many breweries reviving this historic style, smoked beer is becoming increasingly popular. Still though, for the best and freshest versions, you’ll need to brew it yourself!

Fans of Scotch, Southern barbecue, smoky bacon, and smoked salmon should all try brewing a smoked beer. And even if you don’t love other smoked food and drinks, smoked beer might bring a new and interesting aspect to your brewing repertoire.

What is a Smoked Beer?Smoked beers refer to all beers with a smoky flavor. No… the beer isn’t put in a smoker like making smoked ribs!

Instead, smoked beer is made with malt that has been dried in wood-fired kilns. This malt absorbs the flavor of the burning wood smoke, which is transferred into beer during the mashing process.

Smoked beer comes in a wide range of flavors, styles, strengths, and colors. The one common thread is the use of smoked malt, in varying percentages.

What is Smoked Malt?Smoked malt is the key to smoked beer. Interestingly, all beer was once brewed with smoked malt. That’s because malted barley was exclusively kilned over wood-fired ovens, where the smoke passed through the malt. This imparted that unmistakable smoky taste in all brewer’s malt as it dried.

During the industrial revolution, through the 17th century, coal fired kilns began to replace most wood-fired ones. Smoke from the burning coal was diverted to chimneys, and the residual heat produced by the coal was what was used for drying the malt.

Because of this, smoked flavor was eliminated from nearly all malt. Brewers and consumers alike began enjoying the more neutral flavored malts. The shift allowed brewers to have more flexibility in highlighting hop and yeast expression.

Wood smoked malt was relegated to traditional breweries and specialty beers. Today, several maltsters make specialty smoked malt, and some breweries even produce their own. The largest smoked malt producing maltster is Weyermann, in Bamberg, Germany.

Types of Smoked MaltSmoked malt is usually malted barley, but smoked wheat malt is also fairly common. Malt can be smoked with any type of wood, but the most commonly available are:

Smoked Beer StylesSmoked MarzenGeneral in name, Rauchbier directly translates to “smoke beer” from German. In Germany, the term Rauchbier refers to all types of beers made with smoked malt. Confusing perhaps, outside of Germany, Rauchbier generally refers to a specific style of beer: smoked marzen.

Smoked marzen is dark, malty, and very smoky but backed by delicious malt sweetness. Hop bitterness is subdued but present, adding to drinkability. It’s a marzen, a classic German lager, but made with nearly 100% smoked malt.

The most quintessential smoked beer, Aecht Schlenkerla Rauchbier Märzen, is world-class and a must-drink for any fan of smoked beer.

Smoked Pale LagerLess common, but equally delicious, are smoked pale lagers, like smoked helles and smoked pilsner. With all of the thirst-quenching and crisp qualities of the base style, the added layer of smoke creates a delicious new dimension.

Brewed with 40 to 60% smoked malt, smoked pale lagers come across exceptionally smoky due to the subtle base malt and hop flavors. Served cold and highly carbonated, there may be no better pairing for barbecued foods like sausages and pulled-pork.

GrodziskieGrodziskie is a historic smoked beer from Poland. Dating back to the 14th or 15th century, the style is a light and refreshing ale brewed with oak-smoked wheat malt. It’s very effervescent and bright, with a rounded body and soft mouthfeel from the wheat malt.

At around 3 to 4% ABV, Grozsikie is similar to Belgian grisette, but brewed with 100% oak-smoked wheat malt and fermented with a clean German ale yeast.

LichtenhainerSmoked sour ale – certainly not a beer for everyone. You might be surprised by the complex mix of flavors that Lichtenhainer puts forth. The style originates in Thuringia, Germany and is usually brewed with equal parts pilsner malt, wheat malt and smoked malt.

It’s light in body, low in alcohol, pale and refreshing, very much like Berliner Weisse, but not quite as tart. The subtle layer of smoke adds to its drinkability and complexity, creating a very unique and quaffable beer.

Smoked Porter and Smoked StoutPorters and stouts are common candidates to be smokified. Whether you’re brewing a session strength porter or a sticky imperial stout, a bit of smoked malt can complement the roasted and chocolatey malt.

When brewing smoked stouts and porters, be sure to retain some residual sweetness. Too dry, black smoked beers can come across burnt tasting. Using an English yeast, like Wyeast 1318 London Ale III, or incorporating some caramel malts can help soften the mouthfeel.

What makes a good Smoked Beer?Smoked beer can vary widely in style and level of smokiness. Depending on the brewer’s vision, beers can range from very subtly smoked to face-in-a-campfire levels. There are no minimum or maximum thresholds for smokiness.

For those unaccustomed to smoked beer, it does take some getting used to. Many people directly associate smoked flavors with food – like bacon or smoked ham – which can be a bit mind-bending in the context of beer.

Per Schlenkerla, the masters of smoked beer:

“Even if the brew tastes somewhat strange at the first swallow, do not stop, because soon you will realize that your thirst will not decrease and your pleasure will visibly increase.”

How to brew Smoked BeerBrewing smoked beer takes experimentation and an ambitious brewing spirit. Using smoked malt, you need to be willing to accept that the beer might come out a little “too much” or “not enough”. The more you brew with smoked malt, the more consistent you’ll be able to design recipes.

Generally, smoked beers are not overly hoppy. Assertive hop character can clash with smoked flavor, or the smokiness can overwhelm hoppiness. That said, a smoked NEIPA may be possible with the right mix of ingredients – I’ve certainly been considering experimenting.

Recipe designSmoked malt can replace a certain percentage of the base malt from most beer recipes. If you have a favorite helles or pilsner recipe, swap out 40 to 50% of the pilsner malt with smoked malt.

Here’s a handy guide that can help with smoked beer recipe decisions:

It’s extremely refreshing and drinkable like a Pilsner, but with a layer of unique smoked complexity.

Final ThoughtsSmoked beer will never regain its widespread dominance in the brewing world. Let’s face it, smoky flavors aren’t for everyone. That said, the dedicated smoked beer enthusiasts will ensure it’s always available. As homebrewers, we can keep the tradition alive while pushing the boundaries of flavor and style.

As craft beer continues to explore new flavors, as well as revisit historic methods, we’ll surely see more smoke in beer’s future. Professionals and homebrewers alike will continue to use smoke in their arsenal of diverse flavors.