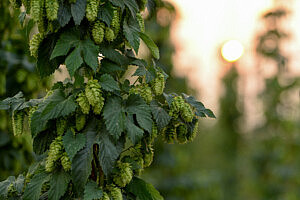 Each year, as those precious green cones are being harvested, we send two teams from Tröegs to the Pacific Northwest for one of the most critical steps in the brewing process: hop selection. Keeping a beer like Perpetual IPA consistent and nailing next year’s batches of Nugget Nectar, Blizzard of Hops, Nimble Giant and other hoppy favorites all starts in the hop fields.

“We go to the Yakima Valley every year to make sure we get the right hops,” says brewmaster John Trogner. “To me, it’s the most important ingredient selection we do. We have so many hop-forward beers, so the stakes are high.”

Hops play such a pivotal role in so many of our beers. In turn, John Segal at Segal Ranch plays part of that role, growing Chinook and Nugget hops – two of our favorite varieties. Our adventure to Yakima is more than just getting the hops. It’s walking these fields with a third-generation farmer getting the right hops from the right people.

And while the sun may set each day in Yakima, the hops don’t sleep. Each variety has their own window for picking – when the cones have matured to the optimal aroma and flavors. So for the six week harvest season most farms work around the clock. We loved walking the fields with the crew at CLS Farms to check out their crop that is just about ready. Their facility had a calm hum as night fell and the freshly picked hops continued to roll in.

Long before Cascade or Cashmere hops were given their names, they started as pollen on two different hop plants. Now, USDA researcher Dr. Kayla Altendorf is getting down to that pollen level while studying and breeding hops in Prosser, WA, just south of Yakima. Her work includes testing for disease and pest resistance, attempting to determine which sex the plants are before planting seeds and ultimately trying to find the next great brewing variety. The work will take years to go from pollen to seed, to seedling, to single hill, and all the way to a plot – which is when brewers will finally be able to do test batches – before even getting a name. We loved walking through rows of Kayla’s first year seedling plants, rubbing the very young cones and giving aroma notes while tagging what we found most interesting. Only time will tell if our team and the crew at Warwick Farm were on the forefront of your future favorite hop!

Our first team went and chose a few early varieties that were ready in mid-September. When our second team hit Yakima, Washington they had the herculean task of rounding out the perfect aromas and flavors for Mosaic, Simcoe and more. Being independent means we can do what’s right for us, and what’s right for our beer – sourcing the best ingredients on a perpetual quest for delicious flavors.