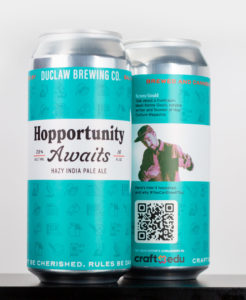 It wasn’t until I got to college that I became interested in craft beer as a hobby.

I’m one of three siblings, and grew up in Charlotte, North Carolina.

My friends and I  would get together with a few other people, hang out, try beers, and talk about our weeks. I remember La Fin Du Monde, a belgian style beer, was a favorite.

Someone  told me about a belgian-style brewery in the United States called Allagash, and now I’m one of the many people in this industry who fell in love with Allagash White. That was my first craft beer experience where I said, wow, this is evocative, this is something. This is a gateway to another world.

Once I graduated, I went to Manhattan to work for Gear Patrol, and was the sixth person hired. The founder, Eric Yang said I could pitch anything after completing my assignments for the day.

I listed everything I knew a bit about, and because I listed Beer of the Week, he said “cool, write us some beer pieces.”

At the time, we were strictly digital, so I could see exactly how many people were reading in real time. In 2013, I noticed the traffic would spike for every beer piece, and wondered if I could do a magazine just based on beer, so that’s what I did.

I launched Hop Culture in January 2017, to very little fanfare. I decided to give this thing a go. It was my friend who came up with the name, Hop Culture, and she’s still on the Masthead.

I had zero experience running a business. I spent 8 months  trying to figure out how we were going to build a revenue model.

Then, in 2017 on a whim, we decided to partner with a craft beer festival.

I thought, “what if we threw a beer festival, look at everything we hate about that experience, and change all of those things?”

Once we ironed out the details, and made the ticket site go live, the whole thing sold out in ten minutes. I had a business partner at the time, and he said, pardon my french, what the f*ck did you do?

But it worked! After that, it was a turning point for us. We did it two months later in NYC.

We did in Ohio. Then Tuscon, Arizona. Then Richmond, VA.

Four years later, we are approaching our 40th beer festival, including three digital. At Hop Culture, we just hit 100K followers on Instagram. It’s one of those things, you realize how arbitrary it is. It’s funny, because the business side, is not something I ever thought I would do.

Entrepreneurism runs in my family. I was the creative one, and I was like damnit, they got me. I’ve learned a lot these past few years, and I’m going to business school this year.

Tap Takeaway  >> Follow your creativity and passions, always asking “what if?”

This June, we threw our first queer beer festival, spearheaded by our head of partnerships, Grace Waits, who has been excited about sharing ways we can create safe spaces within craft beer.

When I walk into a brewery, I just think about what beer I’m going to get. But there are a lot of people who don’t look like me, who go into a brewery, and they have to think about other things. That’s my privilege. If there are things we can do to promote inclusivity and diversity in the industry, that’s what we’re gonna do.

What do you love about the craft beer community? Where would you love to see it grow or improve?

I love the people. Anywhere I go in the country, the world, I have friends to talk to and connect with about this.

Craft beer gives you an opportunity to meet people with different personalities, and hear new ideas from the synthesis of cultures of ideas and experiences. That’s where I would like to see things grow.

I’d like to see a return to a focus on craft. Right now, people are so spoiled for choices out there, and it’s not like it was ten years ago.

If you talk to one of the OG’s, you get a sense that craft is the most important thing to them. Ken Grossman, founder of Sierra Nevada Brewing Company is a solid example.

The focus right now is on a better experience vs. a better taste. I loved that for a time, but sometimes I just want a lager, and now all I can find are ones with heavy flavors.

Ugh. I sound like a cynic, I sound like someone I complained about when I got in the industry. But it’s the consumer demand right now. I don’t fault the system, but I’m looking for balance.

Creativity. I started as a journalist, I have my MFA in fiction, and I’m really interested in storytelling and the creative world.

Where do I start? I have a tremendous respect from Ken Grossman,  Rob Todd of Allagash, Jim Coch of Sierra Nevada, and the way that they not only built enduring companies, but when you dig into what Sam Adams is doing, how they’re showing up for the Queer Community, how Allagash and Sierra Nevada have shown up for the environment. They’ve built values into their ecosystems that I admire, and align with me.

Dr. J, someone who doesn’t look traditionally like someone you would find in your tap. She comes to work every day, and does the work, and she’s helped our company grow into our values.

The list goes on. Lateisha Cook from Beer Kulture, Chris Johnson from Green Bench, the way he’s shown up for equity in the industry, and creating the  best damn beer I’ve had in a year. His lagers are impeccable. He’s also just a rad dude.

Averie Swanson was my first ever interview. I was 23 or 24, she wasn’t much older. I asked her about being a female brewer, and she said, I think that’s part of the problem. I just want to be a brewer.

That shifted the way I thought at a very young age, and made me rethink the questions I was asking. There is a responsibility that comes with that. She has humility and grace, and has really made me reflect on that responsibility, and how I was showing up. And, she makes great beer too.

My house is decked out in Allagash, I have Allagash-themed Russian nesting dolls.

Dive deeper into the craft beer scene at HopCulture here.