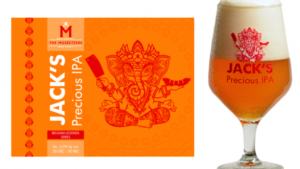 18 Sep “LABEL JACK’S PRECIOUS IPA IS ODE TO INDIAN ELEPHANT” Posted at 10: 39h in Belgian Legends Series, Jack’s Precious IPA, News by Kristy Jacobs 0 Comments 0 Likes REACTION TO CRITICISM HINDUISTIC COMMUNITY ON LABEL JACK’S PRECIOUS IPA LABEL IS ODE TO INDIAN ELEPHANT Brewery The Musketeers is amazed by the reaction of the Hindu community in various media (BELGA news) about the label of their specialty beer Jack’s Precious IPA, which was launched in March 2016. Unlike the news, they themselves were not contacted by Rajan Zed or other members of the Hindu community.

The brewery had an India pale ale when creating the label of Jack’s Precious IPA. , in no way the intention to hurt anyone. On the contrary: the Jacks Precious IPA beer is an ode to the Indian elephant Jack, who was slaughtered in 1904 and reduced to sausage after the Ghent zoo had to close its doors. That is why the brewery chose the ganesha as an icon. With this beer, the brewery wants to visualize this elephant and the Ghent legend in its Belgian Legends line. The brewery wants to apologize if it inadvertently hurts a community.

ABOUT THE BEER Jack’s Precious IPA is a pronounced India Pale Ale, brewed as a real IPA according to The Musketeers must be: in balance and yet different. It is a refreshing and slightly drinkable tasting beer with an alcohol percentage of 5.9%. Jack’s Precious IPA has the character of a floral bouquet with a citrus accent. The beer tastes soft fruity and creamy. The bitterness of the floral and spicy hops is not predominant. The beer has a pale tougher pale gold color with a snow-white foam head that remains as a silk edge after tasting.