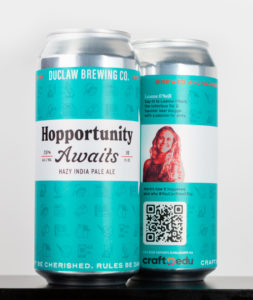 My dad was a homebrewer before I was born, and he co-founder a homebrew club. He continued homebrewing, but once we had us, he scaled back a bit.

As we grew up, he showed us his love of beer. It  was common to drink around the house, and in Ohio, you can legally drink underage with your family, even at the bars.

He would take me out when I was 18, or 19, I started drinking Bells Two Hearted, Dogfish Head, etc.

Going into my 21st birthday, I was a public relations major at Penn State. I thought I would pursue my two passions, so when I was 20, I reached out to breweries to shadow them.

They would let me show up, not drink, but gave me tours where I could ask questions about how I could enter the brewing industry.

I connected with my dad’s friend from his homebrew club who was a brewmaster in Cleveland. I had an informational interview, and he connected me to the marketing director, who mentioned they were hiring an intern, so he asked me if I would do it.

Pictured above: The first brewing event Leanne worked at in 2014.

I started the first week of my 21st birthday, and now I’ve been in the craft beer industry for seven years.

I love the collaborative nature of anything.

This interview goes to show, not many industries would be so casual to hop on an interview with another company. You see it a lot with collaboration beer efforts. Being friends with people at “rival” companies isn’t common in every industry.

For the most part, in diversity, inclusion, and creating an equitable environment. There’s a long running stereotype that craft beer drinkers are for bearded white hipsters. But craft beer is for everyone. There’s still a lot of work to go to achieve that.

I think the two things that have gotten me the furthest have been social skills, and my willingness to interview people. A lot of opportunity has been on me introducing myself, and following up on those conversations. Being inquisitive, and having a willingness to learn, and seeing that there’s always more to learn has been beneficial.

I have a couple!

Megan Stone, who is a good friend of mine, lives right around the corner.

I do really admire the work she’s been doing for the beer industry. She’s been vocal about the issues, and trying to hold the industry accountable.

Eugenia Brown, founder of Beer Chick. She sells t-shirts and merchandise to raise funding for Cicerone scholarships, and the Pink Boots society. I was pursuing Cicerone as well, but to have resources and encouragement was fantastic from her.

There’s a few. A world wide stout from DogFish head. You couldn’t get it in Ohio, so my dad went and got it. I said I wouldn’t open it until the day I got my first real job in the beer industry.

I also opened a Celebration IPA from Sierra Nevada when I got my Sierra Nevada internship. And the first job when I landed in the pub in Chico.

The common denominator is that beer is for celebrating milestones, and it’s hard for me to pick one.

Bonus question: How did your dad get reconnected with the homebrew club?

Back in Cleveland, I was serving at Market Garden, and was dropping beers at the table for the brewmaster. At the time, he was being interviewed for the Cleveland newspaper by Mark Bona, who is a journalist that covers beer in the area. I was talking to them, and he was being interviewed for the 25th anniversary of this homebrew club my dad started.

He mentioned to Mark to talk to me, as my dad was the first president. Then, he got invited to the 25th anniversary party, and he signed up on the spot. He was so happy he finally had the time for it. Now, he’s the president again, won some awards, got to go to Jackie O’s.

Bonus: Would you ever release a beer with your dad?

Yes, I think that would be a lot of fun. With the Jackie O’s Beer, he won that. It was fun to do it together.

Head here to learn more about Leanne, and her top tips to get into the beer industry.

>> Introduce yourself to folks who work at breweries