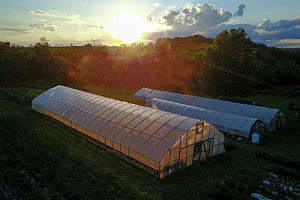 Wandering along the rows of romaine, broccoli, blueberries and peppers at Little Peace Farm is an act of love. Michael and Emily Scheidel, owners of the 20-acre farm in Schuylkill Haven, Pa., know every nook and cranny, every hill and dell, and quietly relish the opportunity to share their land, their life’s work.

“Little Peace is a play on words,” Michael says as he plucks and hands over a sugar snap pea. “It gives you a little peace knowing where your food comes from, doesn’t it? Especially in this weird time. And tongue in cheek, there’s not a lot of peace to this life.”

Indeed, it’s a full and busy life, shared with nine children, three grandchildren, a couple of cows, a small herd of goats, and at any given time, at least a few curious farm cats. Six or seven winding miles to the south is I-78, and a few miles in the other direction is Pottsville, but rolling foothills and a couple of Appalachian Ridges keep the traffic at arm’s length and give Little Peace an air of splendid isolation.

There are three small ponds, a big weathered barn with a hand-painted heart and cross, a smattering of outbuildings, and a line of high tunnels and hoop houses bursting at their plastic seams. In the morning, the Scheidels can watch the sun rise over a hill of corn out the front of their sturdy stone farmhouse, and in the evening, they can watch it set out the back.

In between, there is work to be done.

“What I love most about this life,” says Emily, “is being outside all the time and having the kids helping us and learning how to work. Learning how things grow, how they die, and why we do this. I like that the whole family can be a part of it. It’s not a job that Michael has or that I have that’s separate from our family. It’s all one big thing.”

The Scheidels are among a group of local growers, suppliers and makers who help stock the pantry of our busy kitchen here at Tröegs, and our chefs consider working with all of them a privilege and a point of pride.

There’s Brooks Miller, a former Tröegs brewer who raises livestock at North Mountain Pastures in Perry County; the Lancaster Farm Fresh Cooperative and its network of small, local growers; Joe Jurgielewicz & Son, who raise ducks up in Hamburg; Peters Orchards in Pennsylvania’s Fruit Belt near Gettysburg; traditional Italian cheesemakers Rynn and Dave Caputo in York County; Rob and Amy Hess and their pasture-raised red angus cattle at Bow Creek Farm in Hershey; and fourth-generation potato grower Bryan Bender out in Chambersburg. The list goes on, and if you’ve ever eaten at Tröegs, there’s a really good chance you’ve enjoyed the fruits of this local labor.

“Chefs are driven by a lot of things,” says John Trogner, brewmaster and founding brother of Tröegs. “We look for ones who are into seasonality and local flavors and the experiences they can pass along to our customers. We’re known for putting a lot of creativity into our beers, and we put just as much into our food. We also like to work with farms like Little Peace who take a creative approach to growing. Those three threads of creativity come together at Tröegs.”

We have a few staples on our menu: The smoked brisket and grilled cheese are favorites, and the brown butter popcorn and Oktoberfest pretzels are practically legendary. The rest – from our house-made charcuterie and local cheese boards to our fresh salads and house-made pastries to our large plates and sandwiches – come and go with the seasons and feature what’s coming out of the ground, what’s been freshly harvested, and what we’ve cured for just the right amount of time.

That’s what makes the local relationships so critical. With Little Peace, our planning starts in late February when we sit down with Michael and a stack of seed catalogs and start paging through in search of something that catches our eye … or his.

“It becomes this really neat collaboration,” John says. “We don’t need things like parsley from Little Peace. We can get the basics anywhere. We get to focus on things that they can grow well that are off the beaten path. Maybe something that they’ve grown successfully in the past but no one would buy, and we think, ‘Oh wait, we could use that.’ Together, we predict when these things will be coming out of the ground, and we think about what beers are coming out during the harvest window, and then design recipes around that. When those things come together, that’s the point when it becomes unique to Tröegs.”

“John was always asking for fruitier peppers,” says Executive Chef Matt Lett. “Michael pointed out the Biquinho pepper. They weren’t on our radar, but he’s grown them for us for three years now. We’ve used them in charcuterie, in an orange vinaigrette, and in the hot honey that goes on our Sweet Heat pizza. Try that pizza with a beer like Perpetual. The hop profile amplifies the kick from the peppers, and the backbone of toasted grain stands up to the house-made tomato sauce and our sourdough crust. It’s a great pairing, and you’re only going to find that at Tröegs.”

Slowly high-stepping through long, fertile rows of produce, Michael is shadowed by his earnest and affectionate 6-year-old son Gabe, who’s brightly chomping on a fresh cucumber like it’s a chocolate bar.

Michael laments, partly out loud and partly to himself, the challenges of organic farming. It’s often backbreaking, sometimes heartbreaking. Take this year’s batch of strawberries. The Scheidels had given up on strawberries a few seasons back, but – full of hope – they planted a couple of long rows this year. Unfortunately, a late spring frost ruined the whole lot.

“The weather gets some,” Michael says, “the deer get some, the bugs get some … and the humans get some, right kid?”

But the challenges come with their own rewards.

“When I talk to people from my past,” Michael says, “they remind me that I always talked about being a farmer. And Emily’s friends talk about how she used to dream of marrying a farmer and having a big family.”

Emily smiles. “It’s true,” she says. “This one friend, every time I see her she says, ‘You did it, Emily. You got everything you ever wanted.’